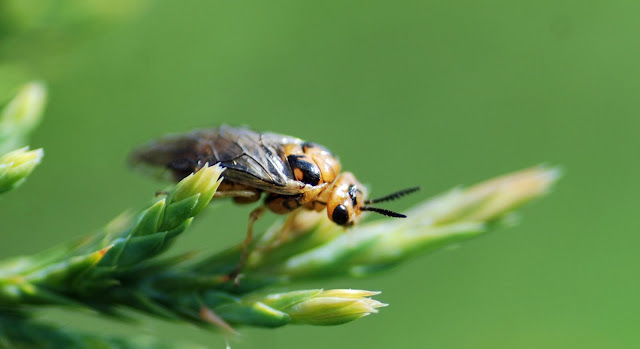 This pretty little Sawfly is a Conifer Sawfly in the genus Monoctenus. I found her on an Eastern Cedar tree in my backyard. I had never seen anything like her before and therefore had no idea what she was exactly. I submitted this image to bugguide and within minutes had an ID ........Conifer Sawfly. Thank you John Ascher for your time in identifying my mystery insect. Another thank you to Dave Smith for identifying it to genus. This particular specimen is a female, and most likely was considering this particular tree as a host for her young. Conifer Sawflies are considered rare to uncommon in the Midwestern States. They are much more common on the Eastern Coast where conifer trees are much more prevalent. In large numbers they can cause significant damage to conifer trees. There are at least 11 species of conifer sawflies in the Eastern United States and most are host specific and will feed on different types of pine trees. Females will lay their eggs within the needles of the pine tree by sawing the needles open with their serrated ovipostior. It is this ovipositor that earns the sawfly their common names, as it is very saw-like in its structure. I feel privileged to have seen this species and will continue to monitor the cedar tree in my yard to see if she laid eggs. Hopefully I will be posting pictures of her offspring soon.
Posted by Shelly Cox at 3:54 PM