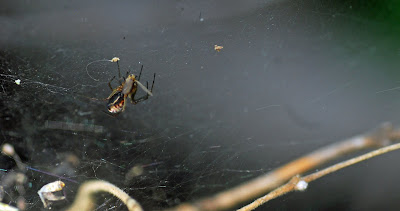 Bowls and doilies aren't just for grandmas dining room table......you will find them in the woods too. The Bowl & Doily Spider (Frontinella communis) are very common spiders found throughout Central and Eastern United States and parts of Canada. These spiders are members of the Sheetweb Spider family called Linyphiidae. They are often found in tall grassy areas or in wooded areas. These are very small spiders measuring up to 4 mm in length or 1/5 of an inch, a bit larger with the circumference of the legs. Because of their tiny size they are often overlooked, but they are a beautiful spider with chocolate brown and white markings. 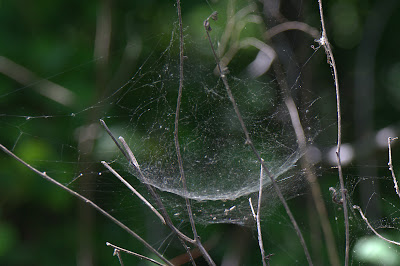 (Internet image by: Daniel)
The web from whence they get their common name is a bit on the complex yet messy side. The top portion of the wed is an inverted dome shaped web (the bowl), the bottom part of the web is a sheet web (the doily). The spider will hang from the bottom of the bowl and when insects fall into the bottom she will reach through and bites them then wraps them in silk. 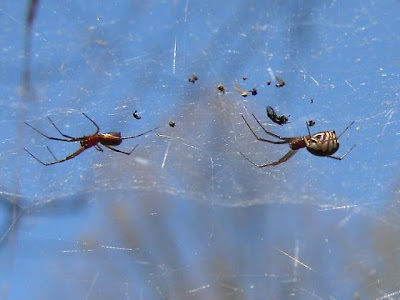 Photo by: Steve Scott
The naturalist Donald Stokes has described the Bowl and Doily Spider web as "....one of the most magnificent feats of engineering in the natural world...It will look either like a small circus net, the kind that is suspended under aerial acrobats or a gossamer bowl about five inches in diameter."
The sheet of its web protects the Bowl and Doily Spider from predators. The spider hangs upside down between the bowl and doily. If the web is disturbed, it drops off or rapidly runs away.
The bowl with its many trap lines serves as protection from above and the second web or doily protects the spider from below.