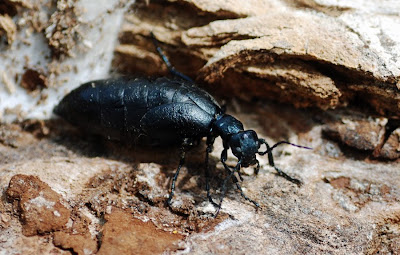 Oil Beetles are in the family Meloidae which includes the Blister Beetles. Oil beetles are flightless as they lack significant wings, instead they have stubby, shortened wing-pads that do not cover their overly enlarged awkward-looking abdomen. This specimen was found near a shed on my husband's uncles place. It was crawling around on the ground. They move quite rapidly for something so oddly cumbersome looking. We placed the beetle in a container to bring home and within minutes the bottom of the container was coated with a yellowish oily-like substance. I assume it is this substance from which the beetles get their common name. I believe this particular species is the American Oil Beetle (Meloe americanus) which ranges throughout the Eastern United States and parts of Canada. They are relatively large at up to 1 1/2 inches in length. Their bodies are all black, with some iridescence. The oversized abdomen will be very ridged in appearance....these are unmistakable beetles. To see one is to KNOW one. Like other blister beetles this beetle also possess a chemical called cantharidin , this chemical exudes from their legs when threatened. This liquid ooze causes painful blisters. The chemical within this liquid secretion has been used in the production of various "date rape" drugs. 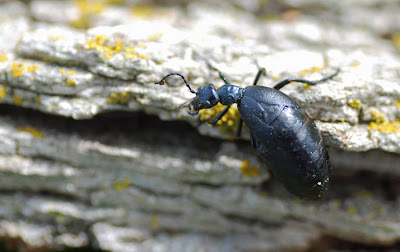 It is not fully known what the adults feed on, but it could be flowers. These beetles have a unique life cycle. The female will lay her eggs near the base of various flowers. When the eggs hatch the newly born larvae must climb up the stalks to the blooming flowers. Then the young larvae will cluster together and form a shape that very much resembles a female solitary ground bee. To make the ruse even more complete they even emit a pheromone that very much smells like the female bee....in fact it is so good that male bees are often fooled and come to "mate" with the cluster of larvae. By the time he realizes his mistake the little larvae have climbed on board. The male bee will carry his stowaways along with him as he locates a "real female" to mate with. During mating the larvae transfer to the female who will then carry them to her underground nest. The little interlopers will remain behind in the burrow and feed on the bees offspring and the honey stores she provided to feed them. The beetle larvae will remain in the burrow to pupate and later will emerge as the wingless prodigy of their parents. Mother Nature offers no limitations on deceit.
Posted by Shelly Cox at 7:08 PM