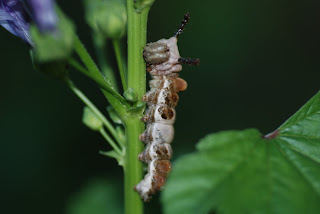 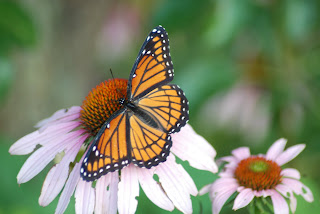 These orange striped butterflies so closely resemble the Monarch that they are often mistaken for them. They aren't even that closely related to the the monarch. This mimic is called the Viceroy(Limenitis archippus) in the family Nymphalidae. The Monarch (Danaus plexippus) is in the family Danaidae. The Monarch is usually larger than the Viceroy, and the Viceroy has a couple of distinguishing characteristics, one is the curved line on the hindwings, it looks very much like a smile. On the forewings is a black triangular shaped cell that contains two white spots. The caterpillar of the Viceroy looks entirely different from Monarch caterpillar. It is a marbled gray and brown with "horns" on its head. Whereas the monarch is recongnized by everyone as the yellow, black and white banded caterpiller found on milkweed. Viceroys were long thought of as non poisonous mimics of the Monarch and therefore were avoided by predators who also avoided the Monarch. New research indicates that the Viceroy may in fact be poisonous too or at least distasteful to would be predators. Viceroys are found throughout all of the Eastern United States. They will be seen in many types of habitats, including meadows, gardens, prairies, backyards, and open fields. Early adults that first appear in the spring will feed on aphid honeydew, carrion, dung, and decaying fungi. Later generations will feed on nectar from flowers as they begin to bloom. Caterpillars feed on plants in the willow family as well as cottonwoods and poplar.
Posted by Shelly Cox at 2:25 PM