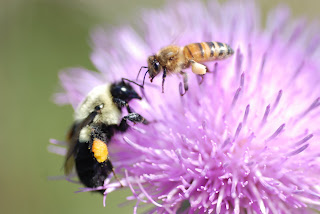 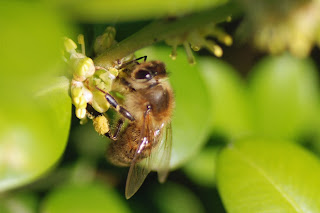 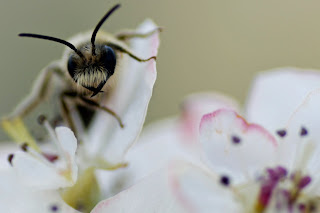 Honey Bees are Missouri's state insect and I can't think of a better insect to have represent our state. They are hard working, industrious, mild mannered and they aid in pollinating over 130 known plants. Including, many fruits, vegetables, grain crops, forage crops and more. With the recent controversy of the Colony Collapse Disorder, there has been much concern about the demise of the Honey Bee. Much research has been done to try and determine what has contributed this apparent mystery disease. Some headway has been made, with the discovery of a mite among many of the bees. Researchers feel this mite is responsible for Colony Collapse Disorder that has effected many hives throughout the country. With the threat of the disappearance of honey bees there has been much concern among many citizens. How would we overcome a crisis such as the loss of such a much needed resource as the Honey Bee? How would the crops we've come to enjoy or even depend upon get pollinated? What insect would be able to step up and take the place of the Honey Bee? These are questions deserving of much thought. Hopefully with the discovery of this mite it will put an end to Colony Collapse Disorder and the Honey Bee will be able to rebound to it's former numbers. In my yard there seems to be no shortage of these bees. I have a mystery bush blooming beside my house that is bringing them out in big numbers. My Bradford Pear is in full bloom and is equally covered in bees. I've found that they are extremely gentle when out foraging for nectar and pollen. I am able to get them to crawl onto my fingers with no fear of being stung. Near the hive would be a different story. When they have a Queen and honey stores to protect you can expect a different and much more aggressive personality to surface. Who can blame them? If someone showed up at my house and took my food and threatened my family I'd probably sting too (if I could). Last September my husband and I made a trip out to Happy Holler Conservation Area near my house. We discovered honey bees and bumble bees nectaring at the thistles and clover. What was so unique about this situation, not that they were nectaring but that the honey bees DID NOT want those bumble bees to be there. The honey bees we literally attacking the bumble bees. They were crawling all over them, biting and toe tapping them. It was actually kind of funny to see. The much larger bumble bee took no notice of them at all. It was as if a mere gnat was pestering them. They went about their business much to the aggravation of the honey bee. They were smart enough to not sting the bumble bees, obviously knowing this would be paying the ultimate price for their greed. No self respecting Honey Bee wants to die, which is exactly what happens when they sting. Their barbed stinger becomes embedded in the skin of their victim and detaches itself, pretty effectively ripping the guts right out of the poor ol' bee, who gives her life either to protect herself or her Queen. All bees found away from the hive gathering nectar and pollen will be female workers. They live about 4 to 6 weeks and work from sunup to sundown at a constant pace to provide for the hive. A Honey Bee's life is a hard one. No time for fun here. The drones or males are the loafers of the hive. They exist only to mate with females. They too pay a big price for their ardour. After mating, they will lose their sexual organs, which remains attached to the female. His guts are removed and he perishes. The drones do not have a stinger, therefore cannot sting. Late in the fall the remaining drones are forced out of the hive by the female workers. They have outlived their usefulness. Their loafing is only tolerated for just so long. They die in the cold while the females form a ball around their queen to guard her and keep her warm. They will rotate position, the bees on the outside moving to the inside of the "ball" to gain warmth, and the ones inside moving to the outside to take their turn where it is cooler. An average hive will need approximately 60 pounds of honey stores to survive the winter temperatures. Honey Bees are capable of flying at speeds of 15 mph, and beat their wings 11,400 times per minute which gives them that distinct "buzzing" sound. I am always so excited when these little gals show up in my yard. I am happy for the service they provide to my plants.
Posted by Shelly Cox at 9:30 AM