If mother nature could create a creature to star in a horror movie, it would certainly be the giant centipede. This creepy crawly is the stuff of nightmares for many and fascination for others. Missouri is home to many types of centipedes and millipedes, and one of the most magnificent centipede found in our state is the Giant Red Headed Centipede. These impressively large centipedes are only found in a few scant counties in Southern and Southwestern Missouri, particularly near the Arkansas state line.

They are commonly mistaken for millipedes.... the most common way to tell the difference between the two is to look at the legs. All centipedes have odd numbered pairs of legs and only one pair of legs per body segment. Millipedes always have two pairs of legs per body segment. The knick-name of hundred-legger comes from the impression of hundreds of tiny little legs all moving in an undulated movement that is almost mesmerizing. Centipedes in fact do not possess anywhere near one thousand legs, but one can certainly understand how the knick-name came to be. Centipedes tend to have a flattened body whereas millipedes are more rounded. Millipedes lack venom, although some species can emit a chemical from their legs that can cause skin irritation. Centipedes are very defensive by nature and quick to bite if handled, millipedes on the other hand do not bite. Another difference between them is diet. Millipedes eat organic matter found on the forest floor or in whichever habitats they live, whereas centipedes are carnivores. Centipedes are predators and feed on a broad diet of insects, and spiders. They are fond of pinkie mice, small snakes, and small amphibians too. These centipedes have excellent eyesight which aids them in hunting down prey. They are also fast-moving creatures and little escapes their notice or their grasp. Millipedes tend to live life in the slow lane.

This particular species of giant centipede varies in color by location, in Missouri they are unmistakable with a black body, 21 to 23 pairs of yellow legs and a reddish head. This color is referred to as aposematic coloring and offers a warning to would-be predators that they are potentially dangerous. Humans should especially heed this warning, as they can and will bite if handled. They have front legs that are modified fangs. It has been reported that the legs of this species can leave tiny punctures in the skin, and each leg contains venom that can be dropped into each wound. This can cause inflammation and irritation

According to one story cited by Dr. Baerg, an officer in the Confederate Army, while sleeping in his tent, was suddenly aroused by the creepy feeling of a large centipede crawling on his chest. A number of spots of deep red, forming a broad streak, indicated the arthropod’s passage across the man’s chest and abdomen. Violent pain and convulsions soon set in, accompanied by excessive swelling in the bitten area. The victim fought with death for two days and then succumbed. The agony suffered by the bitten officer was described by an eyewitness as the most frightful he had ever observed. The famed arthropod scientist J. L. Cloudsley-Thompson once explained that “centipedes seem to exert a weird fascination on the morbid appetites of the hysterical and insane.”

A reaction to the venom of a centipede such as this officer experienced would have been rare even in the 1860’s, and continues to be a rarity today. Nearly all centipede bites are harmless, painful yes, but nonetheless harmless in terms of its impact on your health. Most compare the pain level to that of being stung by a yellowjacket or a hornet. Certainly not something we want to experience, but not likely to kill us. We all know there are exceptions to every rule, for those with allergies to the protein in the venom, a bite can become very serious. Always monitor how you feel whenever anything bites you, if you aren’t feeling well, get to medical help immediately. 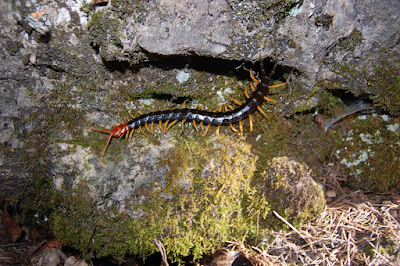 These centipedes commonly reach lengths up to 6 1/2 inches, but lengths of 8 inches have been reported. They are found on rocky hillsides, glade habitats, under logs, stones and other protected locations. They are rarely encountered by humans because of their secretive nature, but should you come across one you won't soon forget the experience. In years past I have owned one of these centipedes, and I can honestly say it is one of the few invertebrates that give me the pause.

These centipedes have excellent eyesight which aids them in hunting down prey. They are also fast-moving creatures and very little escapes their notice or their grasp. Occasionally predators such as rodents, other small mammals, spiders and birds feed on these centipedes. These must be the daring dieters! Centipedes have developed a useful way to distract a predator. They drop a limb; a leg literally falls off. This detached leg will continue to wiggle and distract the hungry predator long enough for the centipede to make a hasty retreat. After multiple molts, the lost leg will begin to regrow. Pretty ingenious in you ask me.

Female centipedes lay eggs in rotting wood and will guard the eggs by wrapping her body around them. When the eggs hatch she will continue to stay with her offspring and look after them for a short period of time. This parental care is unusual among arthropods. The offspring will look similar to the adult, except they are lighter in color and have fewer legs. They will gain the adult coloration and proper amount of legs as they age. 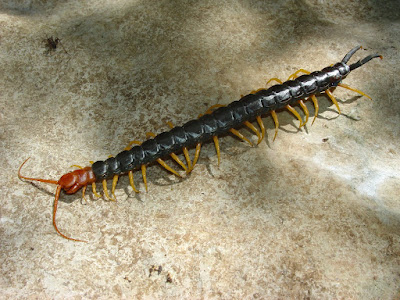 For obvious reasons these fast-moving, somewhat intimidating creatures are not for everyone. No judgment here. Fortunately they come packed in a relatively small package (when compared to an elephant lets say), and are rarely encountered by squeamish humans. These beneficial arthropods consume vast amounts of insects, and for those with arachnophobia, they have a special fondness for spiders. They are quick to feed on small rodents thus removing the little vermin from our midst. At the end of the day it’s about appreciating the diversity that is nature and celebrating even her most creepy creations.
Posted by Shelly Cox at 1:58 PM