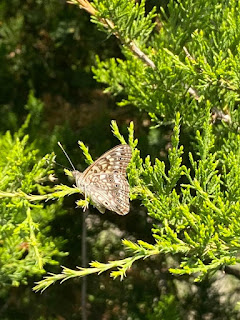 Who has noticed the explosion of small brown butterflies recently? Thousands upon thousands of butterflies being slaughtered by vehicles, swarming buildings, and using humans as perches, it would be hard not to notice! What are these butterflies and why are there so many? The first part of that question is easy to answer, they are hackberry emperors, or more commonly called the hackberry butterfly. The second part of that question is a little more difficult to answer. Swarming activity in animals can be for many distinct reasons, low food in a given area prompts swarms of certain species to seek food elsewhere (locusts commonly show this behavior). Weather conditions can create swarm-like migrations to warmer areas. Males of some species will gather in large swarms to attract mates in a form of an insect dating game. While I could find no definitive answer to the question “Why?” We know weather is not a factor as we are nowhere near fall and migration season. I doubt food resource is a viable reason as there plenty of hackberry trees around as well as the food sources the adults prefer (more about this later). I think we can assume these are males all competing for nearby females. Where did they all come from? The hackberry butterfly uses the Hackberry tree exclusively as their host plant for the caterpillar. When conditions are right, such as plenty of hackberry trees, a warmer winter, and less predation on caterpillars, and a host of other unknown conditions could work together to create a perfect scenario to allow these population explosions to occur. 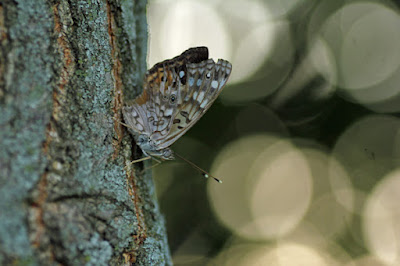 In the 1950’s a study was done in Louisiana that reported similar conditions as we are experiencing in our area. Other reports indicated that these same swarms have been happening and recorded since the 1880’s, all in southern regions. As recent as 2019 these swarms were reported in Northeastern, Kansas. Are weather patterns changing to such a degree that swarming behavior in these butterflies is now moving further north? We do know our winters are nowhere near the conditions we experienced decades ago. We have much less snow and ice and significantly warmer days for longer periods of time. This is bound to have an effect on plants and animals and their ability to survive and adapt. Is it having an effect on the hackberry butterfly in our area? Probably. Could these swarms become commonplace? Maybe.

Fortunately. this behavior is typically short-lived and should be over and done with in about 3 weeks. Until then we will have to tolerate this momentary butterfly apocalypse. They are harmless, and those landing in your personal space are seeking out the moisture and salt from your sweat, not to mention the males of this species are highly attracted to light or bright colored objects. Wearing a white t-shirt may act like a homing beacon for dozens of territorial males.

The hackberry emperors scientific name is Asterocampa celtis, Asterocampa translates to “star caterpillar” and is in reference to the star-like “antlers” at the front of the caterpillar that it shows when alarmed. The word celtis is the genus name for the hackberry tree. The feeding activity of these caterpillars is not known to cause long term damage to the trees, although smaller trees that are heavily populated with feeding caterpillars may become defoliated but should bounce back the next year. Treatment against the caterpillar is usually not needed or recommended. There are two generations of caterpillars in our area. The first generation is what we are experiencing now. The second generation will begin appearing in late summer or early fall. These caterpillars will overwinter in a curled-up leaf they stitch together with silk. Their body color will change to a brown shade to blend in with a dead leaf. In the spring they will become active again and begin feeding on the newly leafed trees and their bodies will change back to their former green color. 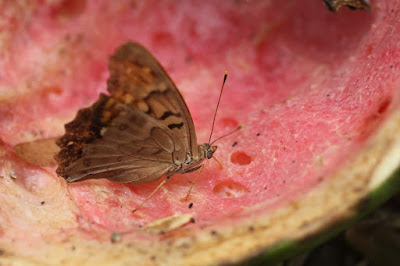 After a couple of weeks of feeding they will form a chrysalis and become the new spring butterflies. As adult butterflies they do not typically nectar at flowers or move pollen from one plant to another. They instead prefer to dine on overripe fruit, sap flows from trees, carrion, and dung. Occasionally you will see one visit a flower, but they offer no pollination service. Instead, they hover over the flower inserting their proboscis into the flower, sipping a little nectar before darting off. This behavior puts them in no contact with the pollen inside the flower just waiting for an industrious individual to transport it to the next flower. 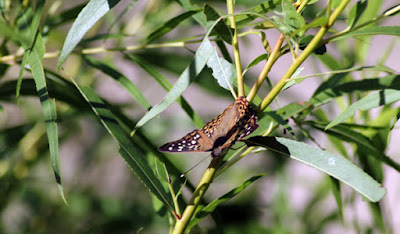 Like all insects these butterflies are cold-blooded and have been referred to as “children of the air” because they are at the mercy of ambient temperatures. They need to warm their bodies and will do so by perching on the tops of plants, wings held perpendicular to the suns rays as a form of solar panel. They also have the ability to shiver in a process called thermogenesis. They use the strong muscles in their thorax as a heat generator, this shivering has a warming effect allowing the butterfly to take flight.

It is believed by some that the spirits, souls and departed loved ones piggyback on the wings of butterflies. These spirits travel the world visiting and checking in on those they left behind. When one lands on you, it is a past loved one letting you know they are near and watching over you. As you step outside into the swarm of butterflies over the next couple of weeks, whisper hello to those dearly departed souls, maybe they will hear.