Partridge Pea, also referred to as the sleeping plant, is a common legume (member of the bean family) in Missouri and much of the eastern United States. It is found in a wide variety of habitats, including savanna, glades, and along riverbanks but also does well in poor soil such as road banks, ditches, abandoned fields and heavily grazed pastures. 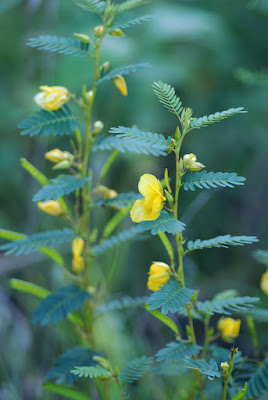 Occasionally partridge pea is purposely planted to aid in road bank erosion, as it grows rapidly and spreads profusely. This plant is insect pollinated by long tongued bees, such as minor bees, bumble bees, honeybees, and large leaf-cutting bees. Honeybees often rely on this plant in areas where appropriate nectar plants are scarce. The nectar flow of this plant is not produced in, or reached by means of the yellow flower, but instead, is accessed through an orange gland at the base of the leaves. In many areas this plant is planted in recognition of their important nectar content. Sometimes leaf-cutter bees will portion off parts of the petals to provision their brood nest with. Three Sulphur butterflies use this plant for their host. You will likely find Little Sulphur, Sleepy Orange and Cloudless Sulphur caterpillars feasting on the foliage.

Bobwhite quail, greater prairie chickens, pheasants and other grassland birds feed on the seed of this plant, the seeds are viable throughout the winter, so therefore they are an important part of these birds’ diet. Because of this plants tendency to grow in thick clumps, young birds, not yet experienced with the risk of predators utilize the thick foliage of this plant as means to hide and camouflage themselves.

Partridge Pea begins blooming in mid to late summer and blooms until the first frost. With sufficient moisture it will retain flowers throughout this entire time. The blooms are somewhat sensitive and will partially close when touched or disturbed. If you raise cattle, be careful, this plant is toxic to cattle. The plant contains a cathartic substance that when consumed in substantial quantities can be stressful to cows and has the potential to ultimately cause death. They like the flavor of this plant, and they will readily consume it. It would be best to not grow this plant near livestock. Although classified as an annual, this plant readily reseeds itself. In areas where this plant is readily pollinated it will produce large amounts of seeds. These seeds are consumed by birds and later dropped in their waste in areas where cows feed. In certain areas ranchers and livestock growers will have to be vigilant and remove plants. In other agricultural settings, away from cattle, this plant has the benefit of adding nitrogen to the soil and makes an excellent cover crop. This plant is also known to attract natural predators of the insects and pests you do not want feeding on your crop. Therefore planting, or encouraging the natural spread of partridge pea around the edges of crop fields goes a long way toward natural insect pest control 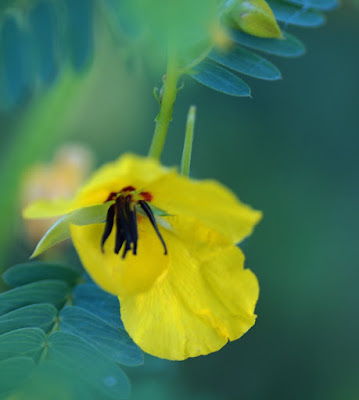 Many Native American tribes recognized the benefit of this species of plant and used it in natural healing, the Seminoles used it to treat nausea. It was also used as a laxative but considering the plants toxic properties I would imagine the treatment was worse than the ailment! The Cherokee used it as a stimulant to ward off fainting spells as well as to keep sports players from tiring out. Those of us who like to "grow native" utilize this beautiful plant within our gardens. It is easy to grow, has beautiful yellow flowers and showy feathery leaves. It loves full sun and is drought tolerant which we know is hugely important in Missouri, when we have no idea if the summer rains will come or not. This plant readily attracts bees, butterflies, and birds, which is a bonus to us nature lovers.
Posted by Shelly Cox at 8:14 AM