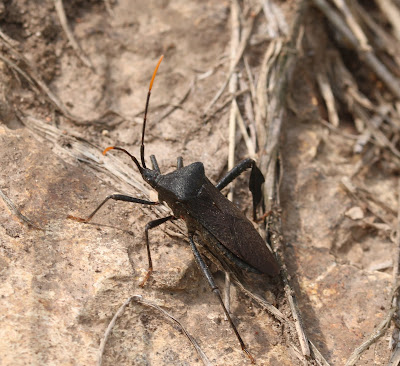 Nothing is more frustrating to a gardener than to discover a 6-legged invader has been dining on your prized produce. Those of us who have grown squash, melons or cucumbers have had the unfortunate experience of battling the leaf-footed bug (Acanthocephala terminalis) or as it is more widely known the squash bug. This true bug in the order Hemiptera has a piercing, sucking mouthpart called a proboscis that it uses to puncture the stems of plants to reach the more tender tissue underneath.

It will inject an enzyme into the plant which begins dissolving the tissue into something the bug can slurp up through their proboscis, much like we suck through a straw. They cannot digest solid food.  In most cases this does not harm the plant, but if you have numerous squash bugs present on your plants, it may mean the plants cannot produce sufficient fruit. These opportunistic feeders are known to feed on a wide variety of garden plants as well as blackberries, hickories, goldenrod, Joe-pye weed and other shrubs.  They have also been observed probing their mouths into bird droppings. It is not fully understood why they do this or if they even consume any part of the droppings. One could assume, like many other species of insects that do feed on these droppings, that they gain some level of mineral benefits. If this is the case, it would mean they do indeed feed on the droppings and aren’t just inserting their proboscis into the waste of our avian friends for the fun of it.

The name leaf-footed bug comes from the swollen leaf-like midsection of the hindlegs. All leaf-footed bugs have four segmented antennae, and this species is one of the largest found in the Eastern United States and may reach lengths up to one inch. They are typically black but may also be dark brown. 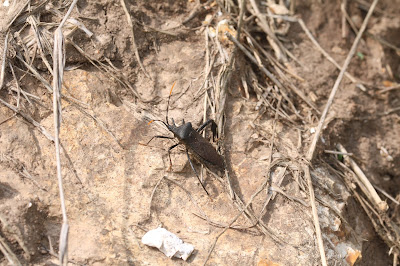 These insects aren’t known to bite, but they would have the mouthpart for such a defense if needed. However, their main defense is a chemical one. If severely disturbed, they will emit a foul-smelling secretion that has earned them another common name of stinkbug. The stinkbugs we are all familiar with are also true bugs in the same order as the squash bug, but they are not closely related, even though they share the same ability to release a nasty chemical defense to protect themselves. These bugs are easily disturbed and will readily fly away with a loud buzzing noise and land several yards away. They usually hide out among the plants they feed on or in the leaf-litter below the plants. The nymphs hide out under the leaves, out of sight of the prying eyes of potential predators. The adults are often spotted on the leaves out in the open. Get too close and they rapidly fly away.

After mating, the females will lay white eggs on the leaves of the host plant. The tiny nymphs hatch in several days and begin feeding. They must go through five instars (molts) before reaching their adult size. There is only one generation per season and the adults spend the winter in leaf litter or under the bark of trees. When spring returns the cycle will start all over again.

How does one protect their gardens from such an unwanted visitor? I am not a huge advocate for insecticides simply because they do not just kill or remove your target insect. They also destroy beneficial insects which can be counterproductive to controlling the very pest you are trying to get rid of. Many insects feed on squash bugs including stink bugs, feather-leg flies, and various assassin bugs. If you are not having any luck with natural predators controlling this pest, organic pesticides have been proven to help, but their residual effects are limited and may have to be reapplied more often and tend to work better against the nymphs which are not as mobile as the adults. As a last resort insecticides containing pyrethroids are effective against these insects. As always follow directions carefully, overuse of chemical control can and does create super bugs that are impervious to their usage.