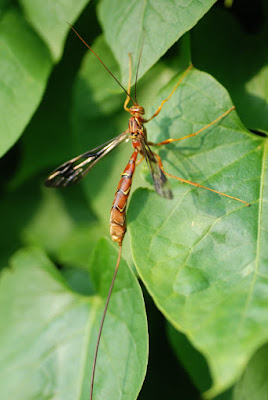 Giant Ichnuemons (pronounced e-nick-new-mon) are parasitic or parasitoid wasps, and distantly related to the wasps we are all familiar with. A parasitoid is different from a parasite in that it kills its host. The process is a bit gruesome, but also beneficial in many ways. Perhaps the most economically important benefit is their ability to kill insects that feed on and destroy crops, and timber. The parasitoid needs to keep the host insect alive for as long as possible, so a paralyzing enzyme is injected into the host. This preserves the host and prolongs its life just until the offspring of the parasitoid can finish its lifecycle by feeding on the host so lovingly provided by its mother. The female must select a host large enough to provide enough food until the offspring is ready to pupate (form a pupa or cocoon).  First the parasitoid eats the fat bodies of the larva, then the digestive organs, keeping the heart and central nervous system intact for as long as possible. Finally, these are consumed as well and the long-suffering victim dies, leaving behind an empty shell.

19th century scientists and theologians struggled with the idea of parasitoid insects and their grizzly lifecycle. The slow death endured by the host was discussed at length by the likes of Charles Darwin as well as others held in high academic esteem during his time. Darwin himself said, in a letter to Asa Gray in 1860, “I cannot persuade myself that a beneficent and omnipotent God would have designedly created the Ichneumonidae with the express intention of their feeding within the living bodies of Caterpillars…”

Giant Ichneumons are the largest parasitic wasp in Missouri. They are found throughout much of the Eastern United States as well as Southern Canada and most of Mexico. These large insects are distant cousins to the much-maligned wasps. While admittedly they look threatening in a very scary way, they are completely harmless to humans. Unlike their wasp relatives they lack a stinger to protect themselves. Instead, the long thread-like extension projecting from the abdomen of the female is called an ovipositor. While it looks like a seriously dangerous stinger, it is completely useless as a defense mechanism. Instead, its only purpose is to lay eggs. Females are the only ones to possess an ovipositor, males lack any projection at all. 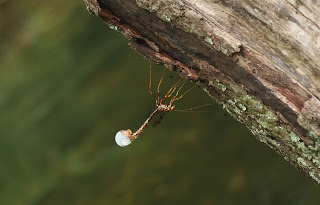 After mating, a female looks for a tree, or stump in the beginning to advanced stages of decay. They seem to prefer trees about 3 to 4 years into their decaying process, this may be due in large part to how much easier it would be to insert her ovipositor within the wood at that stage of decay. Like all parasitic wasps she is searching for the host insect that her offspring will feed on. Horntails, another relative to the wasp, is the quarry she seeks. Once she has located a suitable candidate, she will then drill her 2- to 4-inch-long syringe-like ovipositor into the wood and paralyze the horntail larvae. 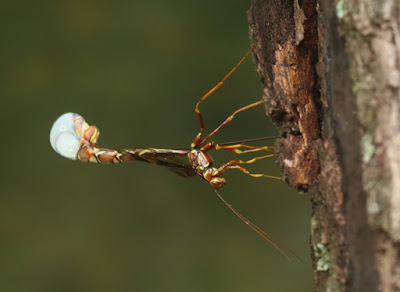 The pigeon horntail has a evolved a strategy to avoid the threat of impending doom to its offspring. They have developed a fungus and mucus excretion that allows the horntail larvae to burrow deeper into the wood of its host tree. Not to be outwitted, the Giant ichneumon evolved right along with it and evolved to sense the fungal secretion left behind by the horntail. At this point she will lay her eggs on the host insect. Depending upon the depth of the larvae she is after it may take her up to an hour to reach her target and lay her eggs. I always wonder how the female "knows" that the horntail larvae are even present. It is believed they sense the vibrations of the horntail larvae moving within the wood. However, nobody knows for certain if this is the case. Do they feel them as they move under their feet? Is there a subtle change in the density of the wood that they can feel with their antennae? Once the larvae have entirely consumed the horntail, they will pupate and emerge as adults the following the spring. However they do it, it sure is amazing. These large wasps are colorful, impressive, yet rarely spotted by humans. Their preference for woodland habitats where decaying timber is plentiful keeps them out of the eye of most people. If you are lucky enough to spot one, keep in mind they are harmless to you, however the same cannot be said for the poor horntail.
Posted by Shelly Cox at 9:15 PM