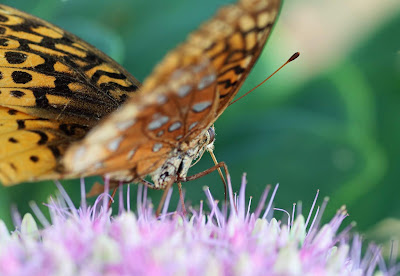 Variegated Fritillary (Euptoieta claudia) Butterflies are common in Missouri, but I only ever encounter a few each season. This year I did not see my first one until a couple of weeks ago when it was nectaring at the sedum in my yard. Late season blooming flowers like sedum, and goldenrod attract a lot of hungry butterflies and other insects late in the season. Food sources are beginning to die and good nectaring plants are hard to come by. If  you want to keep butterflies and other flower loving insects around in your garden longer be sure to plant flowers that bloom at various times of the growing season. Sedum, or Forever Plants as my grandma always called them, are super easy to grow. Find a friend that has some and ask to pick a shoot or two from theirs. Pluck them directly in the ground and water, viola', that's it! Cheap and easy and butterflies love them!

Variegated Fritillaries are related to fritillaries in the genus Speyeria, which includes the Regal Fritillary, and the Great-Spangled Fritillary, but there are distinct differences that separate them. First, the VF has numerous broods each season, whereas butterflies in the genus Speyeria only have one. VF use numerous plants as host plants, including Passionvine, which biologically connects them to the Heliconia Butterflies (longwing butterflies). Speyeria use plants in a single genus.... Viola (violets). This plant specific host preference is one reason some species of fritillaries in this genus are endangered, like the Regal Fritillary that lives in Missouri Prairies. Missouri has lost 98% of it's prairies to agriculture, urban development and habitat degradation. This loss of habitat makes it increasingly difficult for host specific species to hold on in what has essentially become island habitats. 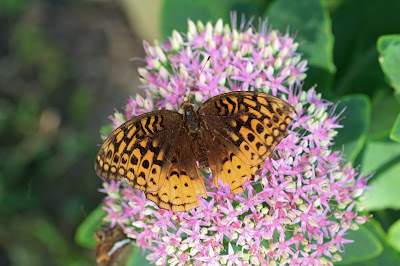 They are found all throughout North America and South America in meadows, along roadsides, in wastelands, flower gardens and forage fields like alfalfa and clover.

Their genus name, Euptoieta, is derived from the Greek word euptoietos meaning "easily scared." Observations of this species by naturalists noted their swift, flighty reaction to being approached. I personally have never had a problem approaching or photographing this species. This particular one was especially tolerant of my presence. Could be it was tattered and worn and just plain tired and more focused on what sustenance it could get than by my bothersome proximity. In other words, it just didn't care. 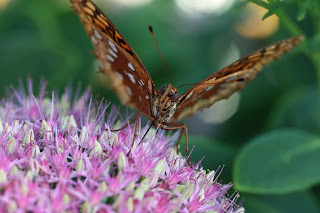