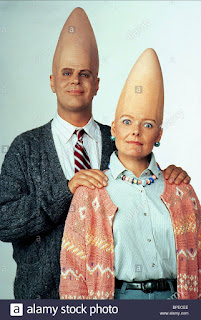 Hearing the word Conehead , for many of us middle-aged folks, brings to mind a classic skit from the older Saturday Night Live episodes by the same name. So popular were these skits they later became a movie starring the original cast members Dan Akyroyd and Jane Curtain. These awkward, friendly aliens did their very best to assimilate into society. As endearing as those lovable aliens were, I am referring to a completely different conehead, this particular conehead IS strange-looking, but not alien. 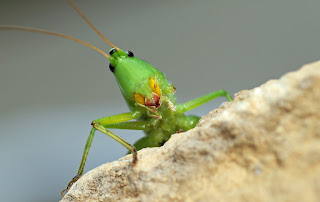 The round-tipped conehead katydid
(Neoconocephalus rotusus) is native to the Eastern United States and found from Eastern Nebraska, to as far north as Massachusetts and south into Florida (but absent from the extreme Southern portion of the state).  When you first encounter a conehead, of which there are approximately 22 known species in the United States, you can easily see the resemblance to those silly aliens. Their heads come to a rounded point at the base of the antennae. Some have long points others have short ones. In the case of the round-tipped conehead, they have the smallest of all the "cones" with a black line running through it (visible in the picture below), which is a key identification characteristic of this particular species. These katydid's come in two color forms. The bright green form is the most common, but there is also a less common brown variety. 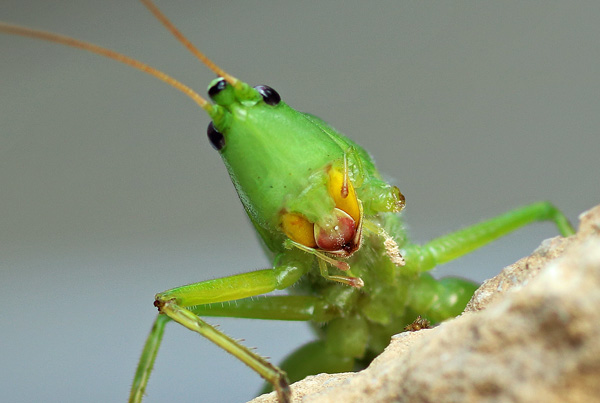 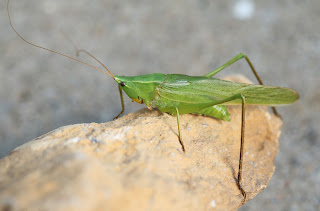 You will most likely hear one of these katydid's long before you actually see it. They begin calling in late afternoon and continue calling well into the night. They are often difficult to see as they blend in with leaf-like camouflage on the plants they hide among. These are the smallest of North America's Coneheads, measuring 1 1/2 to 2 1/4 inches in length. Their song is not particularly appealing to the ears either, but what they lack in musical ability and size they make up for the looks department. They are subtly pretty with bright green bodies, accented with yellow and bright reddish-pink jaws and yellow leg markings. The brown variety is not near as pretty as their green counterparts, they seem to have been passed by in the looks department. 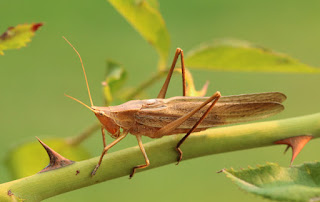 Their antennae are strikingly long and it these that I usually spot before I actually see the katydid itself. They wave these long antenna, which are loaded with special sensors, around their environment sensing for everything from food to mates. Something called Chemoreceptors, are used to pick up the pheromone scent given off by nearby females, or even other males that may be moving in on their territory after potential mates. They also possess tactile receptors that act like "feelers" which help them navigate their surroundings. Additionally they have a special receptor called the Johnston's Organ, located at the base of the antennae. This organ is used primarily during flight to sense gravity, air speed and even the wing beats of bats.

Many studies have been done with this species in relation to bats. It is believed that bats are able to hear the calling of  katydids; essentially guiding them to the location of the serenading romeo. To evade predation by a hungry bat the conehead will use strong leg kicks and steering to move away from the echo-location pulses the bat is emitting. They have also been observed taking deep dives to literally drop out of the sky just as the bat swoops into empty space where once there was a tasty katydid meal. We all know bats in the Midwest are insect eaters and we've been taught they can consume 1,000's of mosquito-size insects in a single night. But to consume a large meal such as a katydid would require much less energy than chasing and swooping in on 1,000's of small snack-size insects. Think of it as going to an all-you-can-eat buffet and ordering a salad versus the smorgasbord that awaits you on the buffet. NOT going to happen, unless you possess extreme willpower. Generally speaking we will stuff ourselves instead of grazing.....viola, so does the bat. In late summer or early autumn bats are consuming larger quantities of food to pack on fat to see them through the long winter hibernation. So insects like katydid's or even large moths are definitely on the menu.

Katydid's possess ears on their elbows, or at the base of the first front leg joint. They are bright yellow and visible in the photo below. Called Tympana, these ears are used to pick up the sound of potential mates, and to hear other katydids nearby. Males can be territorial and will chase away potential rivals. 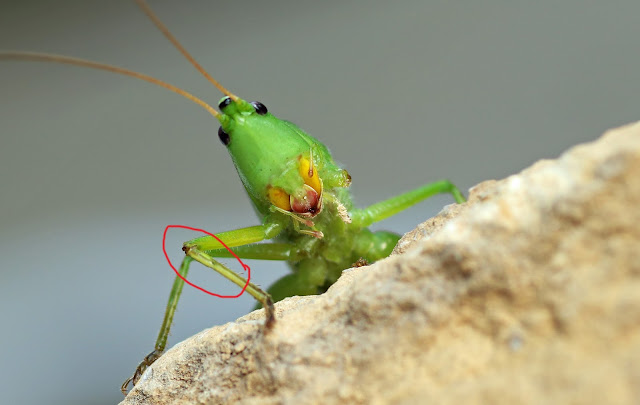 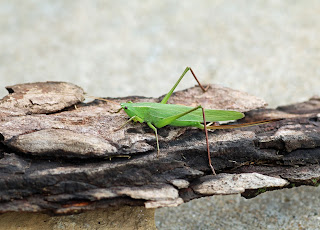 Mating takes place in late summer or early autumn and the females will use a long bayonet-like projection, called an ovipositor, located at the tip of her abdomen to "inject" eggs into clumps of vegetation. The eggs are safely ensconced inside the stems of various plants, all tucked away from the wrath of winter. Next spring the eggs hatch and the young katydids are born looking much like their adult counterparts. They lack wings and functioning reproductive parts, but as they age, and molt these will soon appear. Often they will eat their shed skin casings for extra protein, but occasionally you will find a ghost-like shed skin hanging from a bush or clump of tall grasses.

They feed on a wide variety of grasses and weedy plants in old dry grassy-weedy areas, along roadsides and in old fields. You will also find them at the edges of marshes and in fence rows. Their feeding habits are not known to cause any significant damage to agricultural crops, but they will occasionally feed on garden plants which can be irritating.

We have this particular species in large numbers all around our farm. They even come to the lights at night. I for one look forward to the sound of the katydid as it calls incessantly from the grasses as the sun sets. Truly the sound of  a waning summer and the approaching Autumn.