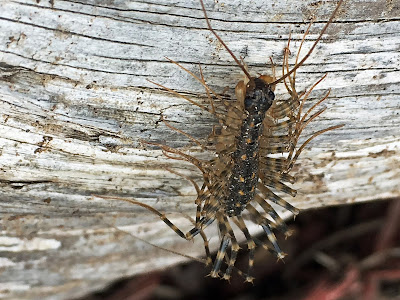 While insects and spiders are often the subject of fear or loathing for many individuals, they can be tolerated for the most part by most people. There are exceptions and centipedes tend to be it!  They have the quintessential creepy factor going on with all those legs, not to mention they are FAST! They can make a trip downstairs a bit disconcerting to home owners who know these many-legged creatures are living in the dark recesses of their basement. While many would consider these creatures a living nightmare, I can assure you they are harmless. Although related, centipedes are not technically insects or spiders since they have more than 6 or even 8 legs. Centipedes have odd numbered pairs of legs, and in the case of the house centipede they have 15 pairs of legs. The female will lay from 35 to nearly a 100 eggs in the spring. Usually they are found under logs, stones or other hidden locations outside with adequate moisture. They will also readily reproduce in human structures in colder climates. The young are born looking very much like their adult counterparts, except with 4 sets of legs. They will gain a new set of legs with the first molt, and 2 pairs of legs with each molt thereafter until they reach adult age and size. This typically takes 5 or 6 molts in total.
The legs are banded light and dark, the body is grayish yellow with three stripes running the length of the body. They are 1 to 1 1/2 inches long, but appear much longer at 3 to 4 inches when you factor in the legs and antennae. The last pair of legs on the female are twice as long as her body, making her appear much larger than males.

I've found several of these at work in our basement and working in a museum I must say I am glad they are there. Nothing worse that carpet beetles for the welfare of museum mounts and other displays. House centipedes routinely feed on a variety of arthropods, including silverfish, firebrats, cockroaches and the larvae of the carpet beetle (which wreck havoc on taxidermy and insect collections). They also readily feed on bedbugs, and with the resurgence of bedbugs in recent years all I can say is YAY! The one pictured here was found upstairs at work today not far from my office door. Not sure what caused it to venture up from the recesses of the basement, but climbing stairs would be exceedingly easy for them as they can scale walls with very little effort. Maybe it was seeking food or moisture. I was able to capture it and take a few pictures, and came to the conclusion this one is probably not long for the world as it was barely moving. Normally these creatures are insanely fast and quick to dart away to a safe hiding place. Because of their erratic, quick movements many a person have ran in terror from them. Several weeks ago at work I was standing in the kitchen with a co-worker when she shrieked and jumped, which startled me and made me jump, when I looked to see what caused her distress I noticed one of these little terrors crawling out from under the microwave....or should I say sprinting out from under it? I rescued the little troublemaker and released it somewhere safer than our kitchen. 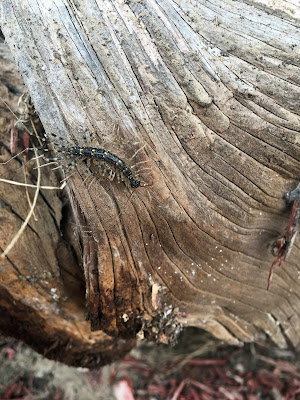 They are native to the Mediterranean Region and were somehow introduced to Mexico and the Southern United States. They have spread exponentially throughout the United States and are common in most areas. They were first found as far north as Pennsylvania in 1849. I am sure it was believed they would not survive such extreme cold winters as they are native to a tropical/temperate climate, but they have managed to do just fine. In these northern climates they simply live in human structures and reproduce there, avoiding the outside altogether. They require moisture and darkness, so basements, crawl spaces, and cellars suit them just fine. Their overall elongated, flattened shape makes it easy for them to fit through cracks in foundation walls, around sump pumps, floor drains and old pipes. In basements they spend the day hiding under cardboard boxes, stacks of papers and other hidden places out of sight until night when they become active seeking spiders and insects to feed on, or unsuspecting humans to scare.

Typically people want to know if they are harmful to humans. They have venom which is delivered through modified legs, so they basically sting their prey to impair them. They possess eyes, but seem to rely on their antennae to "feel" their environment and to find food. Their jaws are considered too weak to do much damage to humans, but occasionally a bite will occur and it is no worse than a bee sting. Naturally if you are allergic to bee venom; the venom of any arthropod could be potentially problematic and you should seek medical care.

If you are finding an excessive amount of them in your home, it could be you have a large pest problem. Getting rid of their food source will often result in them leaving on their own when food sources are not adequate enough to sustain them or their offspring. You may also try using a humidifier and drying up the area where they are found. They do not tolerate dry climates and need adequate moisture to survive. However a few of them is not a serious problem and should be considered beneficial for the free pest control they are providing.