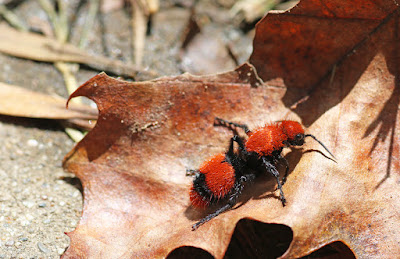 Velvet Ants in the family Mutillidae are commonly found in August and September as they erratically crawl around on bare spaces in pastures, fields, yards and other areas where grass is sparse or nonexistent. There are 3,000 known species found worldwide, and most are easily recognized by the ant-like female. She is covered in dense hairs, in either reddish-orange & black, gold, black & white or yellow. They get their common name from their resemblance to ants. They are not ants at all, but wasps. They do have a somewhat constricted waist like ants, but they lack the curved antennae of ants. These wasps also possess something that the majority of ants do not, a very powerful stinger. Many species of velvet ants have a stinger that is half the length of their body. It is tucked underneath out of sight and only brought out when mishandled or provoked. These wasps try to avoid confrontation, but if mishandled they will sting and it will be an experience you won't soon forget. This painful sting has earned the species pictured here, Dasymutilla occidentalis, the nick-name Cow Killer. The name comes from reports that the sting is so horrible it could kill a cow. Obviously this is an exaggeration, but still we should respect anything that is reportedly so foreboding that it carries the moniker of Cow Killer. Thankfully they're not super defensive or prone to aggressiveness 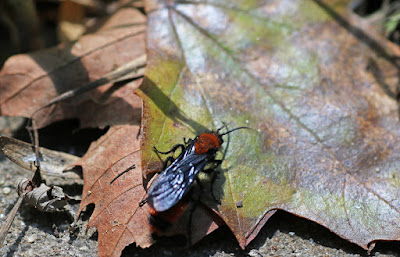 Males do not look anything like the females. They have black-brown wings that the females lack. They do not possess stingers, but that doesn't deter them from attempting to defend themselves with a stinger-like projection on their gentalia. I suppose a penis-poke that feels like being jabbed by a straight pin would cause a person to drop him in a hurry.

The male and female pictured here were found in Branson, MO. I spotted the female first as she was walking in circles on a leaf next to a walking trail I was on. I stopped to watch her and take a few pictures and tried to figure out what her odd behavior meant. Then I spotted the male nearby. When the male would come closer to her she would bob her abdomen up and down as if to attract the males attention. He seemed quite interested in her. I am assuming she was somehow releasing pheromones which attracted this male that was in the vicinity. Not sure what the abdomen bobbing was all about, but apparently shaking your booty brings the boys.

Every time in the past when I have tried to photograph these wasps it has proven impossible. They are quick and always on the move. This female sat still for seconds at a time which allowed for a few quick pictures. The male on the other hand never stopped long enough to manage a decent, clear image.

Velvet Ants are not colony wasps and do not create hives, nests or burrows. After mating, the female will seek out the nest of solitary wasps or bees, like bumble bees, and enter the nest and lay an egg on larvae therein. The newly hatched velvet ant larvae will burrow into the larvae of the bumble bee (or other host) and feed on the innards of the unfortunate victim until they are ready to pupate. Pupation will take place inside the burrow of the bumble bee or other host. The larva that was fed on will not survive. 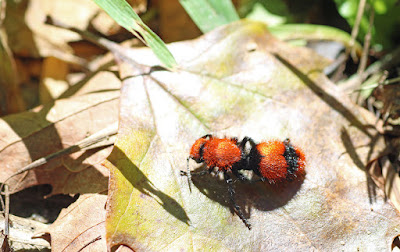 These wasps rarely occur in large numbers and are usually encountered randomly. I've only found 5 or 6 of them in the last 10 years. I am fascinated by them, but careful to never try and handle one!