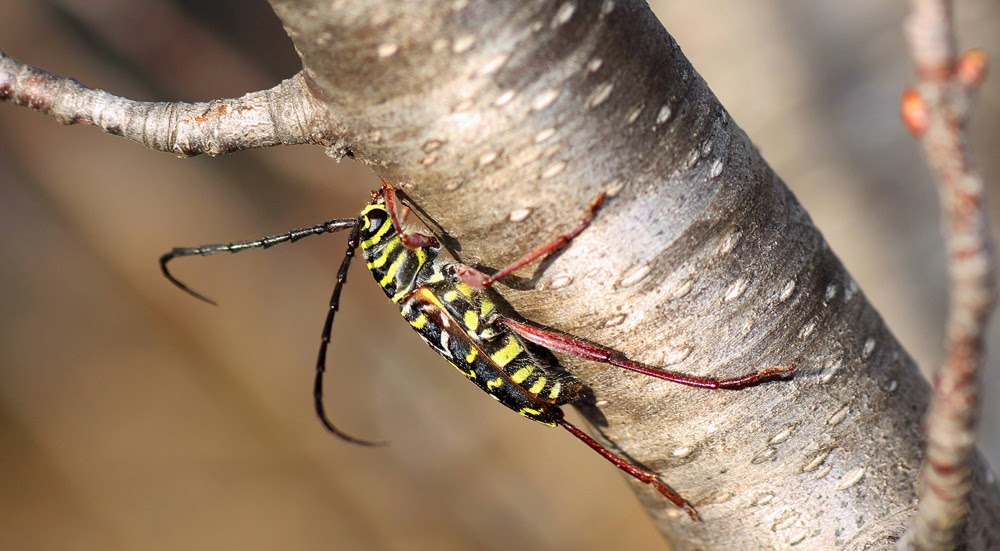 The Painted Hickory Borer (Megacyllene caryae) in the family Cerambycidae, is one of the most frequently misidentified beetles in their range (more about this later). Each spring, usually in March or April this beetle emerges from hickory trees and other closely related trees. In some cases if you burn wood in your fireplace or wood stove you may find one of these colorful beetles flying or crawling through your house as early as January or February. Hickories and Pecans in the genus Carya are the main host tree for this species, but they will also be found emerging from hackberry trees in the genus Celtis. My husband cuts and burns hackberry in our wood stove as well as other species of wood like black locust, hedge and oak. I've found close to a dozen of these longhorn beetles in my house in the past few weeks. They have most certainly come from the hackberry logs since we don't burn pecan or hickory. The one pictured here I took outside and placed on the closest available tree, which happened to be a cherry. I'm sure it will make it's way into our timber where it will find a mate and lay eggs on the hickory trees that are there. We discovered two recently deceased shagbark hickories that will make a great host for them. 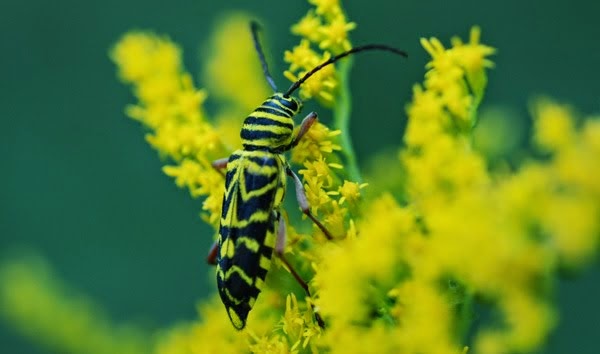 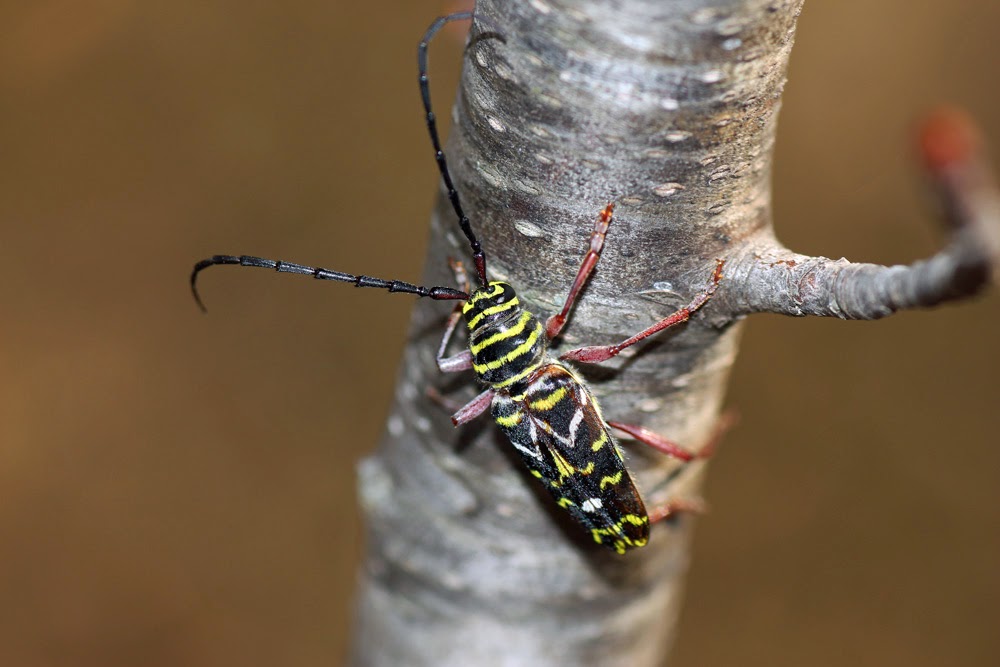 As I mentioned above these particular beetles are one of the most misidentified beetles in their range. So what beetle are they confused with? Another longhorn beetle called the Locust Borer (Megacyllene robinae) which looks nearly identical to the PHB. So how do we tell the difference? Well it can be difficult, even for experts sometimes, but the easiest way is based on seasons. The Painted Hickory Borer is found in the spring, whereas the Locust Borer is found in the fall. Locust borers are frequently found feeding on goldenrod which blooms in autumn. Their host trees are locust trees as their common name would suggest, especially Black Locust. PHB use trees that are already dead as their host, whereas Locust Borers often use viable, live trees. They are considered a major pest of the Black Locust, but some would say that is a good thing. I know several individuals who consider the black locust tree a pest itself. So I guess the pest classification of the black locust borer is all relative to how you feel about the black locust tree. I don't have an opinion one way or the other about black locust trees. I know their blooms smell fantastic in the spring and when I am hiking in the timber it is a welcome treat in the spring to catch a whiff of their blossoms on the breeze. Not only do they smell wonderful, they are edible too!  Black locust wood burns well as firewood and common enough to be easy to come by. But to many they are thought of as invasive.
Other identification characteristics:  PHB have reddish colored legs which Locust borers do not have. PHB also have yellow and white, broken lines on their wings. Locust borers have wider yellow lines on their wings without breaks in them.Use the above photos to compare the two species and notice the locust borer is on goldenrod....their favorite autumn food source. 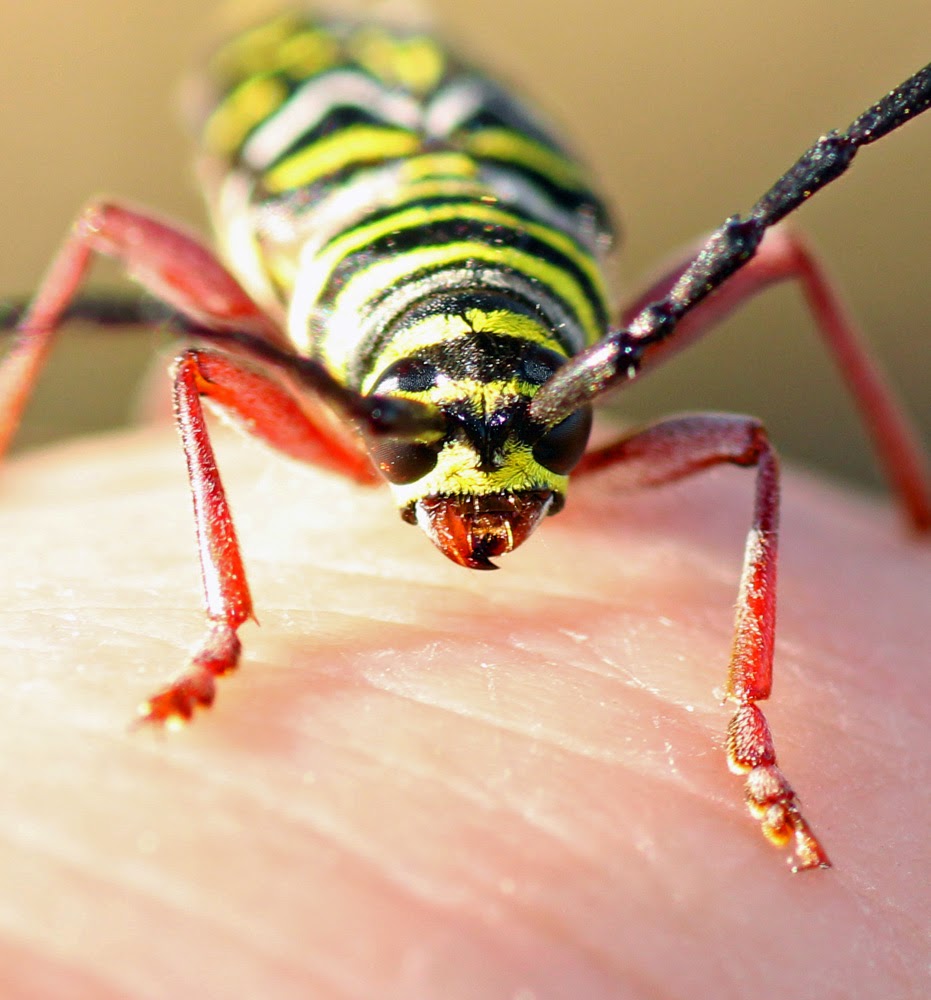 Both species are sometimes referred to as wasp mimics because of their superficial resemblance to certain species of wasps. One can assume this provides them a measure of protection from predation from potential predators that may not be keen on eating a wasp. After all stings hurt, and a good sting to the mouth would be even more reason to avoid them.

PHB are found in the Eastern United States with records from New Mexico as well. They reach lengths up to 20 mm and are a welcome site to anyone who loves bugs as they are often one of the first species spotted in the spring after a cold, long winter of no bugs. In my case they were a beautiful winter visitor which was fine with me. I know they are harmless and will not bite or chew on any wood furniture or woodwork in my house.

PHB was first described by a man by the name of Charles Joseph Gahan in 1908. Gahan was born in Ireland and went onto become the Keeper of the Department of Entomology at the British Museum of Natural History. His specialty was beetles in the family Cerambycidae. He originally classified the PHB as Cyllene Caryae and it was later changed to it's current scientific name. 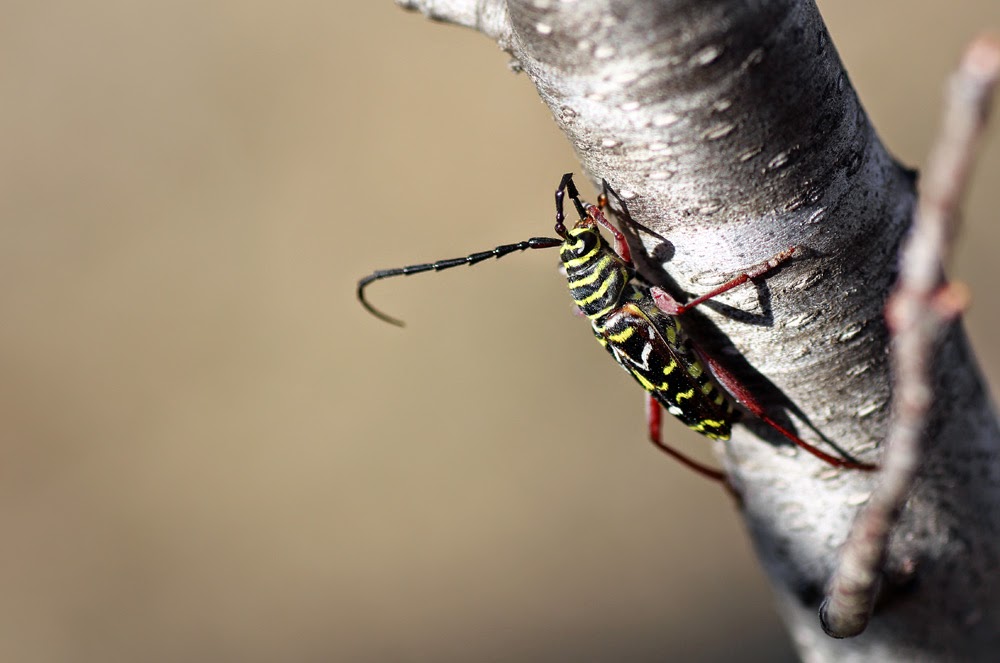 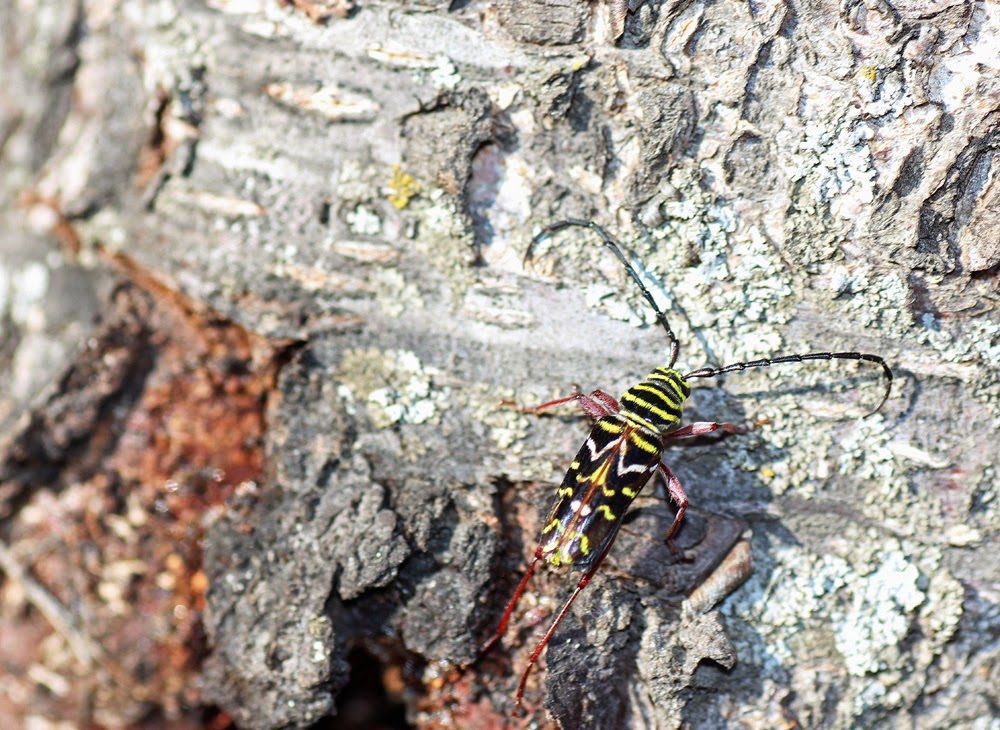