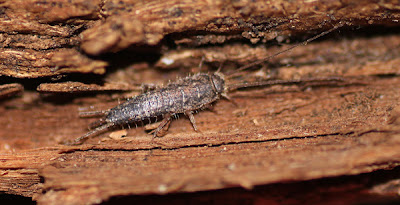 Silverfish in the order Thysanura are one of the most common household pests found in North America. They are considered cosmopolitan which means they are found nearly Worldwide. Unmistakable in appearance with a teardrop-shaped wingless body, three long projections coming from their posterior end and two long antennae located on their head. Silverfish reach lengths up to 3/4 of an inch, and are covered in tiny scales and usually soft bodied. Their common name of silverfish comes from the silvery-blue coloration and their fish-like movements. These are incredibly fast insects capable of extreme short bursts of speed. They typically hang out in areas of high humidity including basements, bathrooms, garages and closets, but may also be found in attics, bedrooms and other parts of your home. They are nocturnal and prefer to remain hidden from humans, therefore infestations are rarely noticed until they are large in number. Humidity levels between 75% and 95% seem to be ideal for optimum population growth and survival.

They feed on a wide variety of substances but prefer carbohydrates in the form of sugars and starches. Diet may consist of glue, book bindings, plaster, photos, paper, sugar, coffee, carpet, clothing and even dandruff. But they will also consume proteins, silk, cotton and synthetic fibers. It is this feeding preference that gives them pest status as they can cause damage to many of our valuable items. They are capable of living up to a year or possibly longer without eating, and in times of famine may turn to other forms of food for sustenance such as meat. If you discover an infestation of silverfish you will need to contact a pest control agent to treat your home in order to get rid of them. Some claim to have good luck with using cinnamon or nutmeg as a repellent to keep them away from certain areas of your home. Although these household spices will not kill them, it may afford you some comfort in keeping them at bay. Silverfish are also prey for arthropods such as earwigs, house centipedes and spiders.

Other methods that may help prevent or control silverfish infestations are: 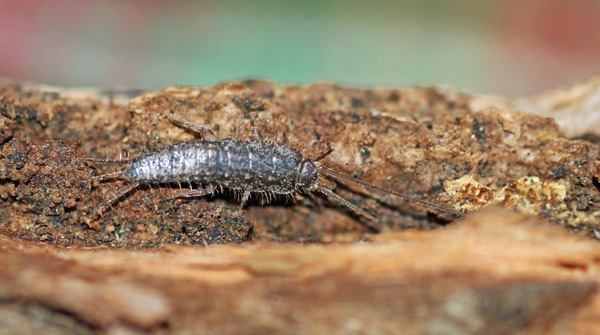 Silverfish are one of the longest lived insects, living from 2 to 8 years and are capable of producing up to 100 offspring in their lifetime. Reproduction is an elaborate affair that consists of a mating dance where the male will approach the female and they will face each other touching antennae. The male will back away and return and once again touch antennae. This may be repeated numerous times. Then the male will run away from the female and the female will pursue him. Once she catches up to him the male will line himself up beside the female so that their tails touch. He will begin vibrating his tail against the female. This stimulates the male to release a spermatophore and stimulates the female to take the spermatophore up into her body. Once the eggs are fertilized she will lay them from one to 60 at a time in small clusters hidden away in tiny cracks or crevices. It takes the eggs from two weeks to two months to hatch.

They will be born looking nearly identical to the adults in appearance, except they will be white instead of silvery-blue. They gain the silver coloration as they age and molt. From 3 months to 3 years they will reach adulthood and will continue to molt even after reaching adult age. They may molt up to 66 times in their lifetime, and some specimens have been documented molting 30 times in a single year! That is highly unusual for an insect.

Even though they are not known to bite humans or carry diseases that can be spread to humans I still kill them each time I find them. I normally let all bugs live, and even if I don't want them in my home I just take them outside and turn them loose. But I have a huge book collection and cannot risk the silverfish damaging them.