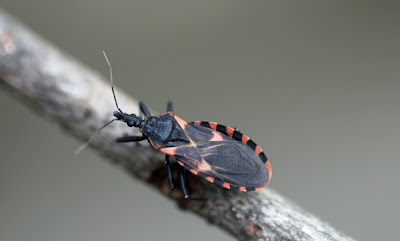 This time of year thoughts turn to Christmas and traditions. One tradition many of us are happy to indulge in is sneaking a kiss under the mistletoe with a special someone. No one however would be happy to be kissed by the Kissing Bug. Eastern Blood-Sucking Conenose Bugs (Triatoma sanguisuga) are often referred to as the kissing bug because of their habit of planting a big juicy, albeit painful kiss right on the lips of hapless victims. As if Blood-sucking conenose, and kissing bug weren't weird enough names, they are also called Mexican Bedbugs. None of these names are very reassuring and there is good reason, these bugs are just not something we want to share our homes with. They can and do make their way into our dwellings and once inside they may use us as a source of food. They seem to sense the carbon dioxide coming from our breathing, once they have landed on our mouth they will use their beak-like rostrum (mouth) to pierce our skin and suck our blood. They inject an enzyme along with their saliva that contains a deadening agent that numbs the area being bitten so that you will not feel the initial bite. This enzyme will  cause significant problems for some people who have an allergic reaction to it. It can cause nausea, vomiting, fainting spells, red blotches as well as burning, itching and swelling at the bite sight. It can also cause anaphylactic symptoms in some individuals. There are approximately 140 species of conenose bugs in the World, with 15 species found in the United States each belonging to the family Reduviidae. They all have the capability to bite humans but in some parts of the Southwest and into Mexico and areas further south they carry this ability even further by defecating while they feed. This behavior causes the spread of a disease called Chagas disease. 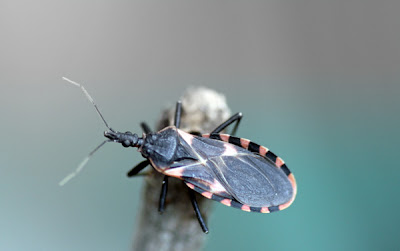 The symptoms of Chagas disease vary over the course of an infection. In the early, acute stage, symptoms are mild and usually produce no more than local swelling at the site of infection. The initial acute phase is responsive to antiparasitic treatments, with 60–90% cure rates. After 4–8 weeks, individuals with active infections enter the chronic phase of Chagas disease that is asymptomatic for 60–80% of chronically infected individuals through their lifetime. The antiparasitic treatments also appear to delay or prevent the development of disease symptoms during the chronic phase of the disease, but 20–40% of chronically infected individuals will still eventually develop life-threatening heart and digestive system disorders. Chagas disease is contracted primarily in the Americas, particularly in poor, rural areas of Mexico, Central America, and South America; very rarely, the disease has originated in the Southern United States. (Taken from Wikipedia)
Females will lay clusters of eggs that hatch in a few days. After hatching, the nymphs must complete up to 8 instars (molts) before reaching adult size. These bugs need blood to survive, it is their sole source of food. Humans are not the first choice when choosing a host, they typically invade pack rat nests and feed on the blood of these mammals. They will also hang out in dog houses or other areas where dogs are bedded. They can and do bite dogs and may spread chagas disease to your pet where the disease is prevalent.
These bugs are nocturnal and are often attracted to lights at night. It is proximity to human structures that often leads them into our homes. Because of their potential to bite they should not be tolerated in our homes. If you notice a significant number of these around your home, you may want to consider extermination. Making sure homes are sealed tight leaving no cracks for them to crawl through should help keep them out of your home. Eliminating areas where rodents would be attracted to will also help as they are frequent feeders on rodents, and will definitely be attracted to areas where mice and rats are located.
There is no reason to live in fear of these bugs, especially in Missouri as they do not occur in large numbers. I've only ever seen two in 20 years. They are harmless outside in their natural habitat feeding on rodents and other mammals. Although I would not recommend sharing the mistletoe with this kissing bandit
Posted by Shelly Cox at 9:49 PM