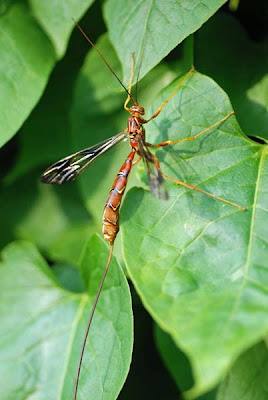 Giant Ichneumon (Megarhyssa macrurus) in the order Hymenoptera are large, interesting insects found throughout North America. They are reddish-brown in color with black wings and yellow legs. The females have an extremely long ovipositor trailing out the end of their abdomen. This appendage is used to deposit eggs inside decaying wood and within the bodies of pigeon horntail larvae. Somehow the female can detect the location of the feeding larvae within the rotting wood. Perhaps they use their long antennae to feel the vibrations of the feeding larvae? To me the mystery is...how do they know that the larvae they are sensing....is the right larvae. How do they know it isn't beetle larvae?

The ichneumon larvae will feed on the pigeon horntail larvae, consuming its body from the inside out. Once they have consumed the entire contents of the larvae they will pupate inside the rotting wood the following spring and once they are mature they will emerge from the decaying wood. The adults do not feed.

Even though the long ovipositor looks dangerous, it is harmless to humans, they cannot sting with it. It is designed for egg laying only. There are three species of Megarhyssa found in North America and may reside in the same area. Each species uses the pigeon horntail as their host. It is not uncommon to find all three species inside the same piece of rotting wood feeding on the horntail larvae. As each species of Megarhyssa uses a different length ovipositor to reach the horntail at different depths within the wood.

I've seen only a few of these large wasp-like creatures in our gardens in the past 5 or more years. I actually had one land on my leg once and walk around tapping its antennae on my leg as if trying to determine if I was a rotting log. I wasn't sure if I should be insulted or not.....was the wasp trying to tell me I have stumps for legs?
Posted by Shelly Cox at 3:18 PM