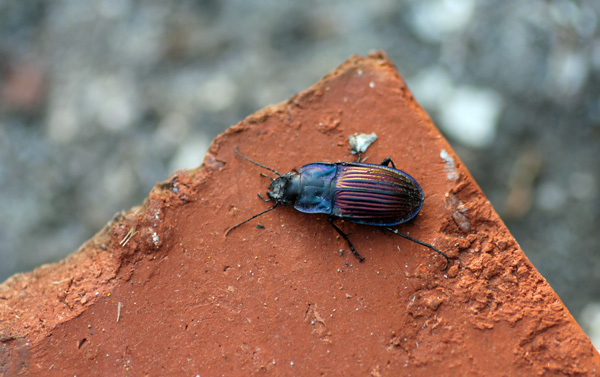 This beautiful metallic ground beetle is Dicaelus purpuratus. They are an extremely fast moving beetle, in fact they are so fast I had a hard time keeping track of this one. Finally, after numerous tries the beetle finally gave up running and settled down for a few photos, before it was off and running again. I could not find much information about them, but presumably they are like most ground beetles and lay their eggs in rotting stumps, where the resulting offspring will feed on insects and insect larvae. Their color is absolutely spectacular.... sheens of purple, blue, and black. They are approximately 20-25 mm (3/4 of an inch) in length.
They are a widespread species found throughout the Eastern United States and parts of Canada. Unlike many ground beetles that feed on insects and insect larvae as adults, this particular species, like many humans eat snails.
Posted by Shelly Cox at 11:47 AM