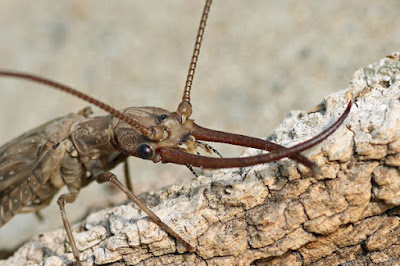 Eastern Dobsonflies (Corydalus cornutus) look like something out of someones nightmare. They are large, alien-looking, and downright intimidating in their appearance. They measure well over three inches in length and with those sickle-like mandibles, the males are often 4 inches or more. Females lack the longer mandibles, but possess a painful bite when harassed. The larger mandibles of the male lack bite force and are most likely used to impress the ladies or to fight off potential competition from rival males. Some resources claim the males use those mandibles to flip rival males onto their back in a form of combat to win the affection of a nearby female. Apparently these WWE wrestling matches between males weed out the weaker individuals and the stronger, more capable males will mate and have their genetics carried into the next generation.

After mating, females will form egg masses on vegetation near a water source, usually a moving stream or small river. These egg masses are often clustered together as several females will use the same location to lay their eggs, in a type of Dobsonfly rookery. The eggs hatch and the nymphs, called Hellgrammites must find their way to water. Whether they just gracefully fall into the water or crawl their way there is dependent upon how far away from the water the egg mass was formed. Often this can be quite a distance, so dropping into the water would not be an option for those individuals, instead they will have to hoof it to the nearest water source and hope hungry predators don't find them along the way. Once in the water the little Hellgrammites will look for suitable places to hide. Typically this will be under stones and other debris on the bottom of the stream. They lurk about waiting for aquatic insects to come within grabbing range and they will pounce and slink back into the dark recesses of their burrow. With a name like Hellgrammite, it calls to mind images of some great Hell-beast lurking in the depths below the waters surface waiting to wreck havoc. If you are a small aquatic insect these larvae are indeed a beast to be reckoned with, however for humans you've nothing to fear except a resounding pinch from their strong mandibles should you grab one. I found one in the flood waters of the Nodaway River one spring. I had no idea what it was as I watched it wiggle and attempt to swim through the shallow waters covering a county road near the river. I have always been a "I need to touch it kinda person" and this sometimes gets me into trouble. I very quickly realized my mistake as the little bugger bit me resoundingly on the finger as soon as I grabbed it. I dropped it in short order....lesson learned. It was at this point I recognized what it was and gained a healthy respect for them.

Fishermen have used Hellgrammites for hundreds of years as bait to catch trout and other game fish. Trout fisherman create very convincing flies that mimic hellgrammites much to the chagrin of a hungry trout. Many water creatures including salamanders, fish and crayfish all feed on hellgrammites, which might explain why they hide under stones and other debris. 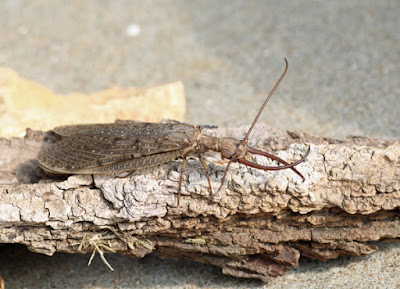 Once Hellgrammites have had time to grow and reach their full larval size, usually after 12 molts or skin sheds, they will leave the water and look for a place on land to burrow into loose soil where they will create a pupal cell. Once buried and safely ensconced in this chamber they will remain here for 7 to 14 days as they pupate into adult Dobsonflies. When the adults emerge they will begin looking for mates to pass on their genetics to the next generation. Males live about three or four days, females live up to ten days.
In Virginia and Pennsylvania the emergence of the Hellgrammites from their watery homes seems to be synchronous. A mass exodus of these little hell-beasts is usually triggered by a large thunderstorm; it is believed that the vibrations of the thunder acts as some sort of signal to the Hellgrammites to leave the water and head for land. As the larvae crawl out of the watery depths the locals call this phenomena "Hellgrammite Crawling," not to be mistaken for pub crawling. 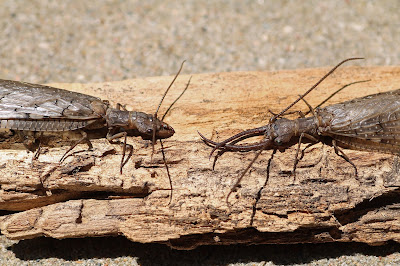 It is uncommon to find adults during the day as they hide out in vegetation near the water. At night they are attracted to lights and are commonly found at porch lights and other night time light sources. They have also been found to be attracted to Mercaptan which is the substance that is added to Natural gas and Propane that gives it the distinct odor we all recognize as a potential leak. This apparent attraction they have to this substance may act as a calling card to the presence of these gasses. They also seem to prefer moderately clean water environments and do not tolerate highly polluted water. This means they can be used as a bio-indicator of potential health problems within watery habitats. If these insects are present it is a good indication the water is healthy and clean, if not, maybe these environments need a closer looking at.

There are 60 species of Dobsonflies in the order Megaloptera, which means "Large wing." Within this order there are 30 species in the genus Corydalus. The Eastern Dobsonfly is the most common and largest within the United States. They occur throughout Eastern North America from Canada to Mexico. There are three species in the Western United States, however the  majority of species within this genus occur in South America. 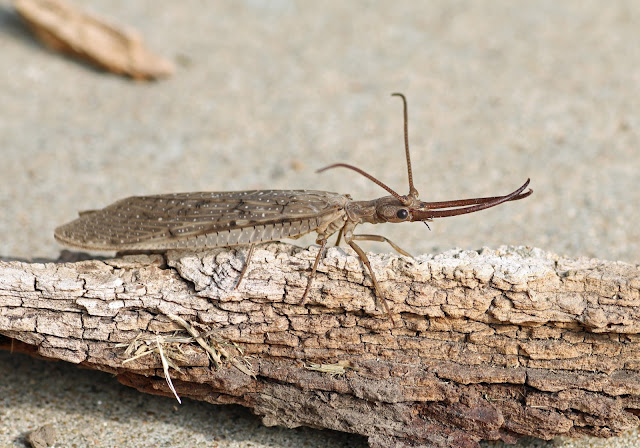