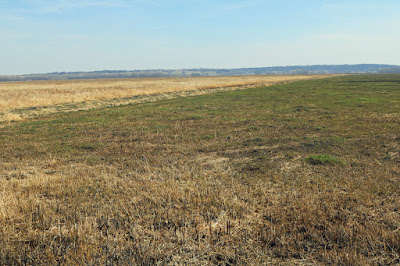 Loess Bluffs National Wildlife Refuge (formerly Squaw Creek NWR) is located outside Mound City, MO on approximately 7300 acres. Habitat varies from prairie wetlands to loess soil hills. Wildlife from whitetail deer to snow geese call this refuge home. Of all the wild animals that live here the Massasauga rattlesnake is probably my favorite. There are only a few locations throughout the state that have the appropriate habitat for these little rattlesnakes. They are a prairie wetland species and use crayfish burrows to hibernate in. Each spring the refuge biologist searches for these snakes on the burned prairies, often with the help of volunteers. I always feel honored and a little bit excited to be included in the field research.

Sunday myself, my husband Joey as well as my good friend Cindy participated in the first field day of the spring season. Today Cindy and I made the trip back up to the refuge and helped again. I feel like we walked miles in burned fields stepping over patches of grass and through swampy ground. To say we got our exercise is an understatement, but all the legwork was worth it. We were able to see 7 Massasauga Rattlesnakes, 2 Graham's Crayfish Snakes, 3 Plains Garter Snakes, 2 Diamondback Watersnakes and numerous Red-sided Garter Snakes. 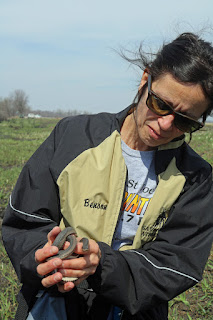 When Cindy and I arrived and headed out to catch up with the other volunteers I spotted a Graham's Crayfish Snake and pointed it out to Cindy. She was excited by the find as this was a first for her. We took a few minutes to take pictures with it before releasing it back where we found it. The frightened little snake musked Cindy as soon as she held it. Musk is substance that snakes release when alarmed. It is a mixture of musk and feces.....yes it stinks! BAD! We walked a few feet more and spotted a Massasauga and a couple of red-sided garter snakes. In less than 5 minutes, we had spotted 4 snakes!!
This was already proving to be a great day. The temperatures were in the mid 70's and looking to top out at 80 by mid-afternoon, so along with snakes, and exercise we were getting some much needed sunshine. 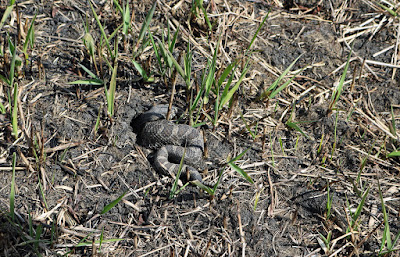 Male Massasauga part way out of a crayfish burrow. 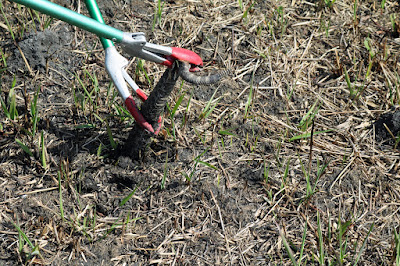 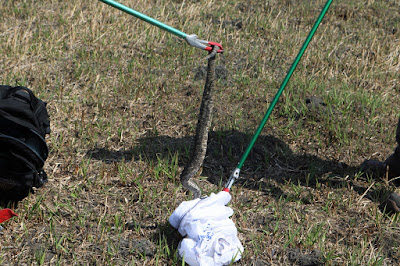 Safely bagging the snake to weigh it. 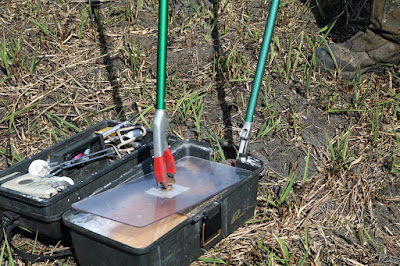 Placing the snake in "squeeze box" to safely get data on him. 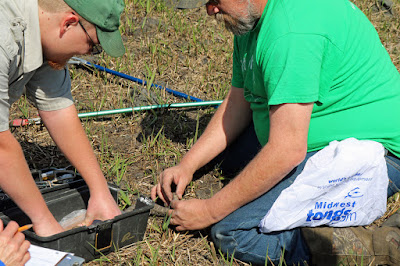 Darren and one of the volunteers "Sexing" the snake. It's a boy! They were excited to discover he was a recapture and had been previously PIT tagged. Now they will get new data on a previously captured snake. 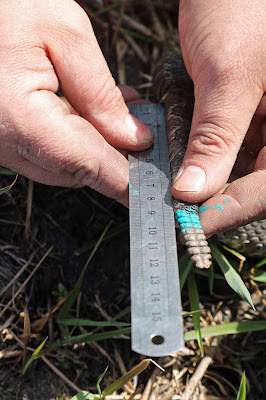 Measuring the tail length and counting rattles. 7 rattles and a button on this one. The green color on him is nail polish. It does not hurt the snake and is used to mark him so he isn't recaptured as we walk back and forth in the field looking for more snakes. 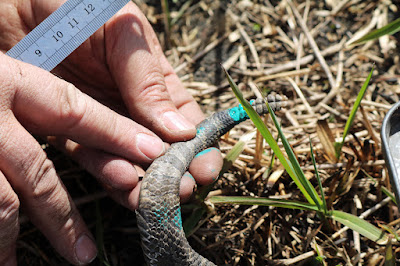 Snake fungal disease is an increasing problem for many species of snakes. This snake is showing some signs of having had had the disease in the past. There are some obvious nodules and scarring near the tail. 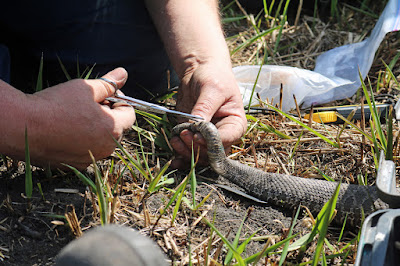 Clipping a scale off the belly near the tail to send in for testing. Sending it in for testing will determine if the snake has been exposed to the fungal disease. 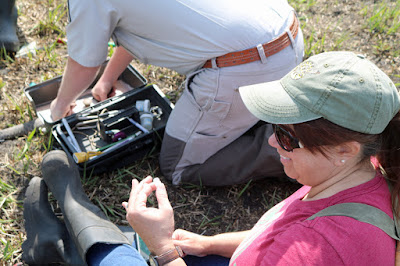 Me getting a vial ready to put the scale clippings in to send for testing. 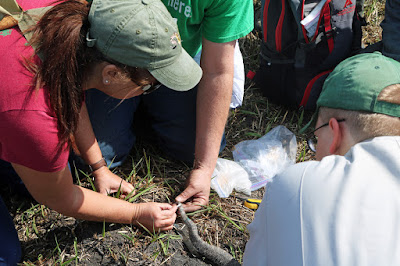 Me swabbing the area on the snake where the nodules are present. The swab will be sent in with the scale clipping for testing.

Resting after his abduction and probing by aliens. 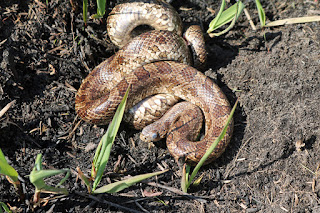 This prairie kingsnake was the first of the day and had a funky looking eye. At first we thought it could be the fungal disease, but after looking more closely we decided he had just shed his skin and did not shed one of his eye capsules. This gives him a goggle-eye appearance. He seemed healthy and showed no other signs of having any fungal infection.I handed the snake to Cindy so we could show it to the biologist and it musked it her good! This required a good washing with sanitary wipes. Poor Cindy...two muskings in one day!

The Prairie Massasauga, formerly the Western Massasauga (pronounced mass-a-saw'-ga) Rattlesnake is one of the smallest rattlesnakes found in Missouri wetlands and marshes.  Loess Bluffs NWR has a strong population of these snakes in large part because the land is federally owned and the snakes are protected there. These ongoing studies help to determine population density and over all health of the snakes. Snakes are especially important in rodent control and as a vital part of the food chain and should be left alone. They are also indicators of the health of their environment. 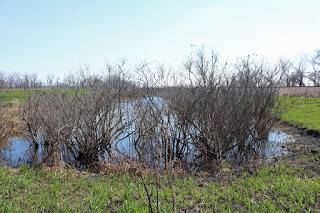 In the Chippewa language Massasauga translates into "great river mouth" which describes the lands where they are found. Like all Missouri venomous snakes they are "pit-vipers" , meaning they have an extra sensory organ in the form of pits located between the eyes and the nostrils. These pits are heat sensing organs that help them locate prey. They have excellent eye sight and a great sense of smell. All of these senses combined make for a formidable predator. They commonly prey on mice, frogs, insects. Juveniles are fond of other serpents with Midland Brown Snakes making up the bulk of their diet. These snakes are also an important part of the food chain and sometimes fall victim to eagles, herons, raccoons, foxes, and hawks. Not to mention the occasional motorist who would rather kill snakes as to look at them. This near-sighted viewpoint of snakes is what has led to the near extinction of many species. Humans should try to exercise tolerance for these misunderstood creatures and recognize their importance in the over all health of a given habitat. 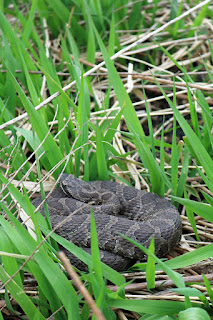 These are a slow moving snakes that rarely strike unless being provoked or handled. Although males tend to be rather testy! Their venom is less toxic than that of most venomous snakes, but should still be considered dangerous. If bitten; immediate medical attention should be sought.  During the spring they will be found in lowlands near marshes and wetlands. In the hotter summer months they are found in higher ground near grasslands, farmland and open fields. Like all snakes they are often found sunning themselves on rocks, and roadways. Massasauga rattlesnakes reach lengths up to thirty inches. Their ground color is gray or tan with numerous darker spots, there are even melanistic black varieties found occasionally. 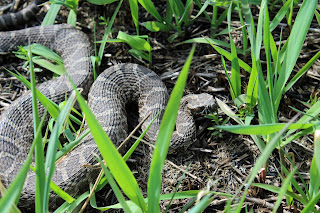 Massasaugas are ovoviviparous (eggs develop in the body of the parent and hatch within or immediately after being expelled). The female produces large, yolk-filled eggs which are retained within her reproductive tract for a considerable period of development. The developing embryo receives no nourishment from the female, only from the yolk. Eggs of the Massasauga hatch inside the female and the young are born “alive.” A female snake that retains eggs in her body can bask in the sun, thus raising the temperature of the eggs and speeding their development, resulting in a variable gestation period of two to four months. The average litter size is 8 with anywhere from 3 to 12 being possible.

After birth, the young are on their own—no maternal care is known in snakes. As is the case for all cold-blooded vertebrates, the growth of the young is heavily dependent upon the amount of food available. 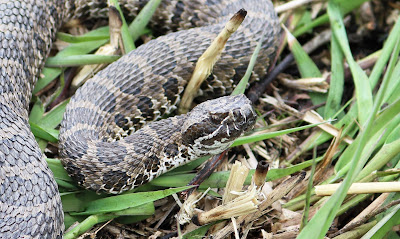 The knowledge I gain by participating in these field trips looking for massasauga rattlesnakes as well as other snakes is invaluable to me as a naturalist. I am able to take what I learn and apply it to programs and it better equips me to answer questions the public may have about our scaley wildlife. I am more than excited to return to the refuge this spring and offer my assistance in looking for these beautiful reptiles.