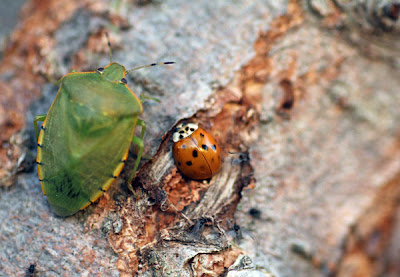 Green stink bugs seems to be the most prevalent insect in my backyard right now with exception possibly to the Asian Ladybug, so to have a picture with both invaders seemed only natural.

This species of green stink bug (Chinavia hilaris) is one of the most common of all stink bugs found in gardens throughout North America. They are fairly large at 3/4 of an inch in length. The color is uniformly bright green with yellowish margins near the abdominal region.

These stink bugs are readily found near woodland edges, in agricultural fields, and gardens. I have hundreds of them in my yard this fall, which could be in large part because of the unseasonably warm temperatures we've been having. It could also be because of a lack of available predators to feed on them. Perhaps it is just a good year for them. The nymphs of this particular species give no indications of the adult form it will soon be. They look entirely different......the shape is somewhat similar, but look at the color! Early instar nymphs will be beautiful combinations of black, green and orange. Later instar nymphs will begin taking on the trademark green color. After 5 instars (molts) they will reach adult size, usually by August or September. 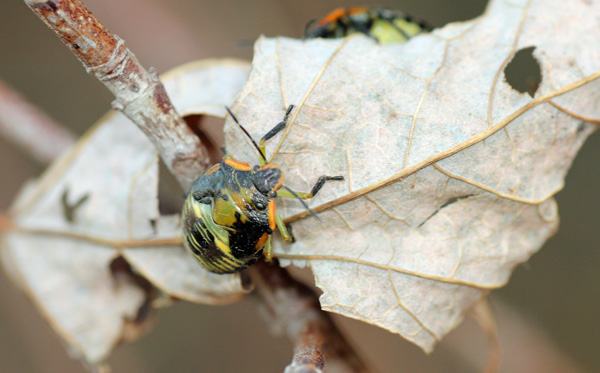 (4th instar)
These bugs are plant feeders and use their piercing mouth parts (called a rostrum) and a special enzyme in their saliva that breaks down plant tissue to suck the juices out of a wide variety of plants. It is much like humans sucking juices through a straw. Think...."insect SLURPEE!" Often times these little bugs can become major pests, especially if they occur in large numbers and take a liking to your prized garden plants or agricultural crops. They are known to feed on tomato, bean, pea, cotton, corn, soybean, and eggplant as well as hundreds of others. It seems we can add bald cypress to the list of known plants as many of the green stink bugs found in my yard were feeding on the sap coming out of the tree. I also found them on Ninebark and Elm gleaning sap from them as well. 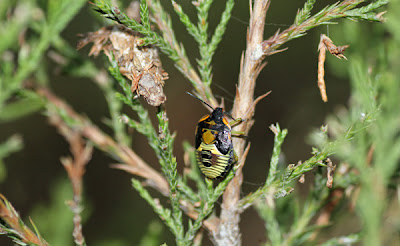 Their feeding habits can spread diseases to plants, it can also zap the plants of vital nutrients and ultimately stunt the plant which may result in death of the plant.

Stink bugs get their common name from the defense mechanism that these little stink bombs implement when disturbed or threatened. They possess gland located on the underside of their bodies that emit a musk-like vile smell that is sure to repel any predator bent on handling them or eating them. Young stink bugs will hide under leaf litter to wait out Missouri's cold winter months. When spring returns they will become active again and begin seeking mates. After mating, the females will lay their barrel-shaped eggs in clusters on the underside of leaves. The young hatch and feed on plant juices just like their adult counterparts. There may be several generations per year and it is common to find them in all stages of development in the same area. The life expectancy of green stink bugs is about 2 months in warmer climates, in areas where the onset of winter sends them into a dormant stage they will live many months longer. 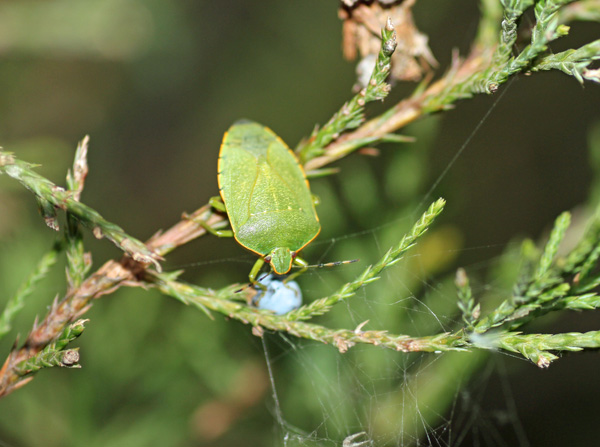 Biological control is often attempted in areas where they are causing extreme damage; certain parasitic flies and parasitic wasps are known to use these bugs as the host for their own offspring. Many creatures are brave enough to risk the stink bomb for a quick meal....frogs, toads,spiders and birds will all make a meal out of these bugs. 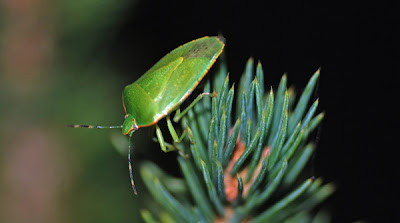