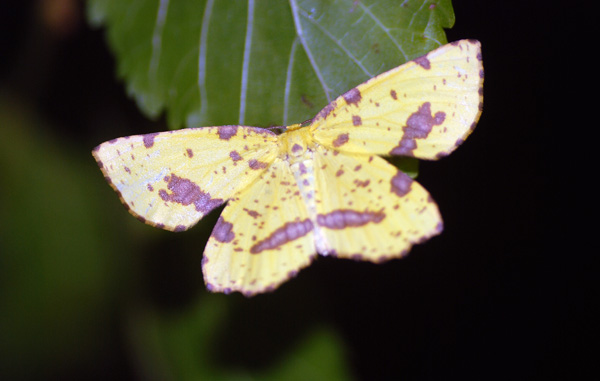 This brightly colored moth is a Crocus Geometer Moth in the genus Xanthotype in the family Geometridae. They are extremely common throughout North America and frequently visit porch lights or other artificial lights at night. This moth can also be flushed from timbered areas and grasslands bordering timberland during the daytime. There are several species within this genus and each are nearly identical and generally cannot be accurately identified without genitalia magnification.

Rufous Geometer (X. rufaria)
Of these four Crocus Geometer (X. sospeta) and False Crocus Geometer (X. urticaria) are found in the Eastern portion of North America which would include Missouri.
The genus Xanthotype has its root word from the Greek Xantho which translates into Yellow.
Geometer translates into Earth-measurer and comes from the caterpillar stage of these moths. Geometer caterpillars are called inch worms, loopers or spanworms and lack the amount of prolegs that are found on most species of lepidoptera. They instead have appendages at both ends of their body which allows them to clasp with their hind legs and reach forward with their front legs. This bends their body in a loop-like fashion, and as they continue to move forward it gives the appearance that they are measuring their journey.

These moths are a beautiful shade of bright yellow with purplish colored blotches on the wings. Males have more blotches than females. Males of this species, like the males of most moths have feathered antennae to "smell" the pheromone emitted by the female. They are capable of smelling her scent from great distances. Once mated the female will lay her eggs on a wide variety of host plants including Spirea, goldenrods, catnip, ground-ivy, red osier dogwood, and rhodora azaloa. The caterpillars are twig mimics and blend in with the branches they are living among.
Posted by Shelly Cox at 4:23 PM