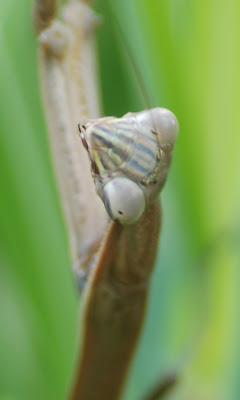 Chinese mantids (Tenodera sinensis) are impressive praying mantids to say the least. They are large, expert predators that prey on a wide variety of insect yummy's. I've often referred to them as the T-Rex of the insect world, after all the resemblance is there with the short front legs and the almost raptor like way they capture and consume food. They aren't limited to just eating insects and spiders however, they are also capable of capturing and consuming frogs, and even hummingbirds.
Chinese mantids are native to Asia and made their way to the United States probably in a shipment of plants. They were first discovered in Philadelphia in 1896. They now have a stabilized population throughout the Eastern United States and are beginning to expand their range to include portions of the Western United States. They are aggressive hunters and compete for food with other native species of mantids. This could potentially pose a threat to another Missouri Mantid, the Carolina Mantid. This smaller cousin of the Chinese Mantid is native to Missouri and often finds itself prey to the larger more intimidating Chinese Mantid. They also compete for some of the same food resources. 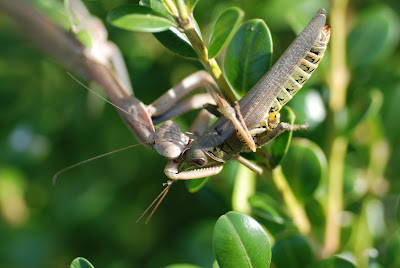 These praying mantids even exhibit signs of being territorial and will not tolerate those of their own kind in their vicinity. I captured this eerie image (below) of a smaller (immature) praying mantid that was sans head. It was still very much alive and crawling around the cedar tree completely without its head. It remained alive, I assume running on nerves, for several hours before finally succumbing to death. It illustrates the often gruesome world that insects are a part of. It is truly a bug-eat-bug world out there. 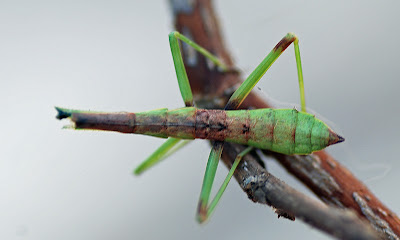 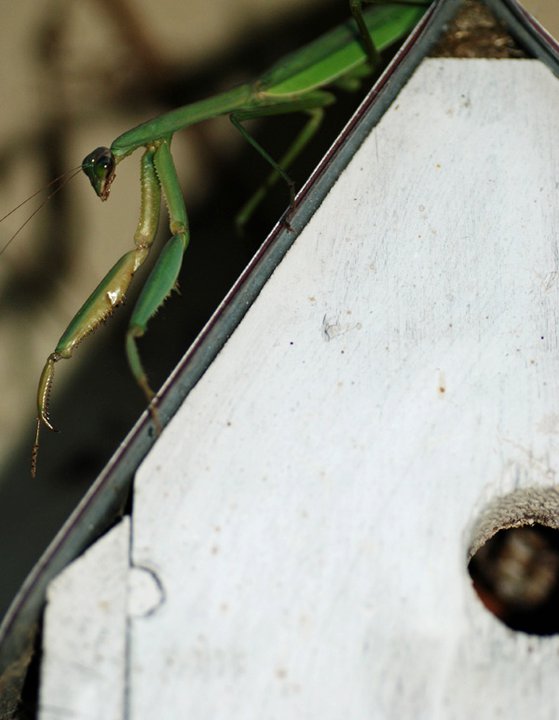 Mating occurs late in the summer, the female emits a strong pheromone (Chemical perfume) that attracts males from great distances. Many of us have heard the tale of how the female will bite the males head off during mating. In some instances this is true, she is certainly capable of it, and if she feels he isn't performing up to her expectations she will chomp his head off and this triggers a response in the male which increases his performance and offers her a tasty nutritious snack that will aid her in egg production. This gruesome beheading doesn't always take place though, most of the time the male walks away with his head, I suppose it all depends on the females mood. Being a male praying mantid is truly living life on the edge. Once mated, the female will lay her eggs within a foamy egg case called an oothecae, this frothy mixture hardens to protect the eggs and once dry resembles styrofoam. 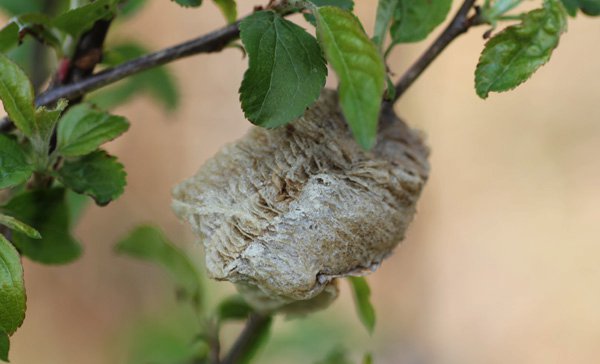 These egg cases overwinter and the following spring the young will emerge. Typically the first meal of many of these tiny praying mantids will be their siblings. Fewer than 15% of the newborn mantids survive to adulthood. 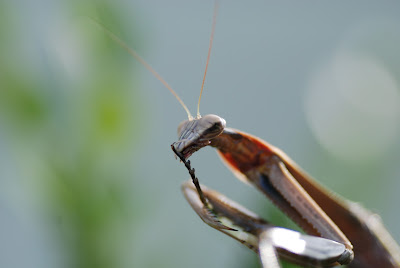 Praying mantids can be found in meadows, along roadsides, near gardens, grassy areas, wildflower prairies, most anywhere their insect prey can be found. These insects are favored by gardeners everywhere. Many gardeners order them from  mail order supply houses to releases in their gardens. This is good in theory but typically they will fly away shortly after being released and will probably supply your neighbors garden. 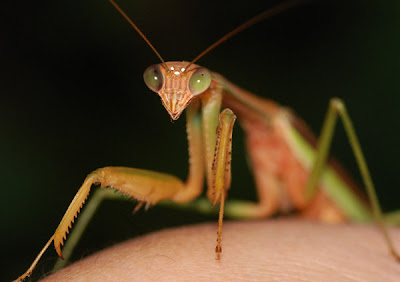 Occasionally like any other creature they can become injured. Whether it is from tangling with something much bigger than itself, like perhaps a bird. Or from a fall, or some other unknown source they can and do sustain injuries, like one pictured above. Notice the two different colored eyes. This particular mantid was having great difficulty in keeping its balance and could barely stay in a standing position on my hand. Most likely this one will become part of the food chain as it cannot defend itself properly.
These large insects make excellent pets as well. They are easily kept in aquariums or bug keepers. They eat a variety of insects, so you can catch grasshoppers, crickets and moths in your yard to feed them. They almost seem to possess a personality, they will follow you with their eyes, and they are sure to win you over. Many people ask if they bite, and like most any insect if they are mishandled they can bite. Praying mantids cannot bite through human skin, so it would feel more like a pinch. The males have spines on their front legs and if they should happen to grasp you with them it is possible for them to draw blood, it would be like a scratch that bleeds. Males also tend to fly. Females would make a better choice. To tell the difference is relatively easy. Females have large abdomens, giving them a "fat" look. This is for egg production. Males are very slender. Happy hunting. 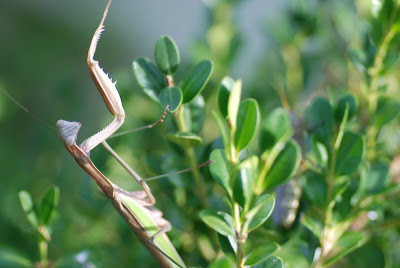