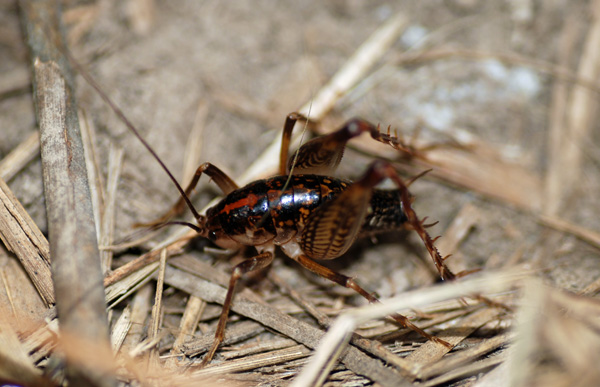 This crazy-looking long-legged bug is a camel cricket in the family Rhaphidophoridae. This family includes cave crickets, cave wetas, camelback crickets,and spider crickets. These crickets are known to love damp areas, such as under rocks, logs, outbuildings or basements. They can also be found in caves which earned them their other common name of cave cricket.
These crickets are characterized by their super long legs and antennae as well as a somewhat hump-backed shaped body. Their hind legs are extremely long with a somewhat chicken leg appearance. They lack wings like other crickets have, and instead crawl to their destinations. They have terrible eyesight so the long legs and antennae aid them in finding their way around in the often dark environments that they favor. It is not uncommon for these crickets to make their way into our basements. They are after the moist dark habitats they favor, and our basements often fit the bill perfectly. If you have an excess of these crickets it could signify that you have a moisture problem that may need to be addressed. Away from human dwellings they are often found deep inside caves. These inhospitable environs often make it hard for these crickets to locate food and it is not uncommon for them to consume their own legs for nutrition, even though they lack the ability to regenerate a new one. When faced with the approach of possible predators they will often lunge at the threat rather than retreat. This aggressiveness is a bluff however as these crickets are harmless. I would think this behavior would be counterproductive in the extreme and would often lead to them sacrificing their own lives in exhibiting such a power play. Then again perhaps it works.
Adults and young nymphs will overwinter in dense vegetation or in human dwellings. In the spring they will become active and the adult females will begin laying eggs in the soil. In a few weeks the newly born nymphs will emerge looking almost identical to their adult counterparts. The adults and nymphs both feed on all sorts of organic matter, from animal to plants. They can become a nuisance in human structures such as basements when their food source runs low and they begin seeking other sources of food such as our stored clothing, linens and other keepsakes we do not want destroyed.
The following was taken from North Carolina's University website. I thought it was helpful info and wanted to pass it along to my readers.
Non-chemical control methods
Although pesticides can help reduce the nuisance problems with camel crickets, they are not a long-term solution. Effective control starts with eliminating harborage sites, reducing conditions that are conducive or attractive to these pests and by excluding these insects from our homes:
Chemical control Outdoors: Any chemical control should focus first on outdoor barrier treatments. Sprays applied to foundation walls, around vents crawlspace accesses, basement doors and windows, and insecticidal baits applied along the perimeter can be quite effective unless there are heavy rains. In crawlspaces, insecticidal baits placed in corners or along the sill plate will be most effective. Spraying in a confined area, such as a crawlspace, requires caution and the proper application and safety equipment. Granular baits are a better choice for use in a crawlspace, but these products are not readily available to the general public. You can or else contact a licensed pest control company for assistance. Consult your county Cooperative Extension Service Center or the North Carolina Agricultural Chemicals Manual for a list of appropriate pesticides.

Indoors: Any of the common household (indoor) insecticides can be applied to baseboards, and areas behind appliances. However, if you follow the steps outlined earlier for excluding these pests, the need for indoor applications should be reduced.
Posted by Shelly Cox at 2:59 PM