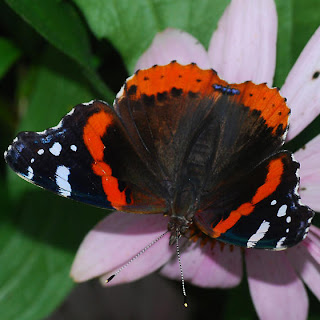 This beautiful black and red butterfly is a red admiral (Vanessa atalanta), and they are a common sight throughout Missouri as well as their entire range of North America, Asia and Europe. There are two generations per year in the United States, and each generation varies a little. The winter form that appears early in the spring will be smaller and duller in color, whereas the summer form will be much larger and brighter in color. Their wingspan will range in size from 1 3/4 to 3 inches.

Most of North America must be recolonized each spring by southern migrants of this species. They are known to overwinter in Southern Texas, and most likely in other southern regions where the temperatures and food sources will allow. They have a very erratic, rapid flight that can make capturing them or photographing them difficult, but they are one of the most beautiful butterflies to visit any garden.

The adults feed on sap flows, rotting fruit, and bird droppings. They nectar only when those preferred food sources are not available. When found nectaring they seem to prefer common milkweed, red clover, coneflower, aster, and alfalfa, but will also be found on other varieties as well.

Males perch on ridgetops where available to wait for passing females.....if no ridgetops are available they will choose high vantage points that allow them a good view of neary females. After mating, females will lay their eggs singly on the leaves of the host plant. In the case of these butterflies they use nettles, and possibly hops.

Their preferred habitat is moist woods, yards, parks, marshes, seeps, moist fields. During migrations, the Red Admiral is found in almost any habitat from tundra to subtropics.

I find them in my gardens in large numbers each year, both because I have nettles that I allow to grow in small populations to encourage their visit, and because our yard is near a moist woodland. Nettles are not generally the favorite plant of most people, although they are edible if fixed right. If you can manage to tolerate a few stray nettles you are amost guaranteed to attract this species to your yard.
Posted by Shelly Cox at 12:24 PM