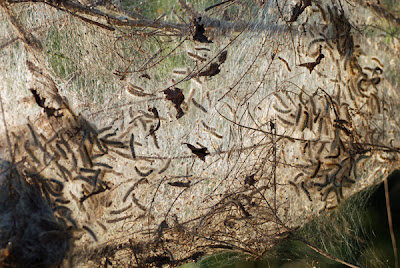 We've all seen these messy looking tent-like webs that often engulf trees in the fall. They are the handiwork of the Fall webworm (Hyphantria cunea).
While these webs are unsightly and certainly not aesthetically pleasing they do not cause any lasting damage to trees. The female moth will lay her eggs in clusters of up to a hundred on the bottom side of leaves. They will be encased in a hair-like substance that protects them until they hatch approximately a week later. The caterpillars begin feeding on the surface of the leaves and as they eat they produce a silky substance that is used to form the webs. As the caterpillars grow so too does the tent. In large colonies the tents may encompass the entire tree. When the caterpillars are in their last stage of growth before forming their cocoon they well begin feeding on the entire leaves of the tree. The reason these caterpillars have very little affect on the overall health of the trees they are feeding on has to do with the time of the year they are found. Trees in the fall are nearing the end of their growing season and preparing to go dormant for the winter. Sap and vital nutrients that the trees depend on in the growing season are now receding back into the heart of the tree. Therefore these caterpillars can munch away and the trees can withstand the feeding frenzy and come back to their former beauty the following spring. The only exception to this may be if you have extremely young trees or ornamental trees. The moths are native to North America and can be found throughout the United States, Canada and Mexico. In 1940 these moths were accidentally introduced to Yugoslavia and from there it wasn't long before they spread to other countries. They are now found nearly Worldwide. In North America they are known to feed on approximately 120 tree species. They predominately favor hardwood species like walnut, pecan, hickory, elm, maple and fruit trees. Worldwide there are over 600 species of trees they are known to feed on.

As caterpillars they are highly variable in their appearance and can range in color from pale yellow to dark gray with yellow spots. They will have a combination of long and short bristly hairs, and two pale stripes running the length of their bodies. They will remain caterpillars for 4 to 6 weeks before forming a cocoon and emerging the following spring. In the pupal stage they can be found at the base of trees tucked away under fallen bark and leaves. 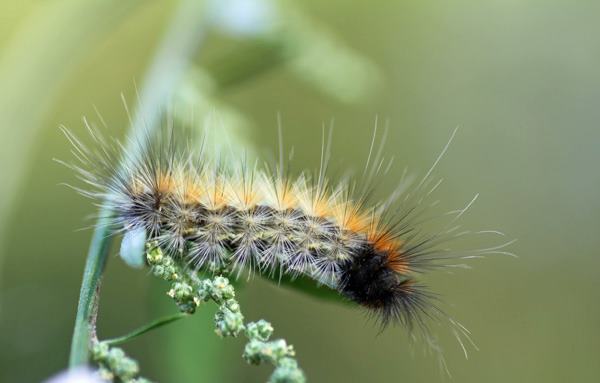 As adults they are mostly white in the northern part of their range, whereas in the southern part of their range they may be marked with black or brown spots on the forewings. The front legs have bright yellow or orange patches. They have a wingspan up to 2 inches and their bodies are extremely hairy, which aids in keeping them warm as they fly around at night. These moths readily come to lights at night and will often be seen at porch lights. 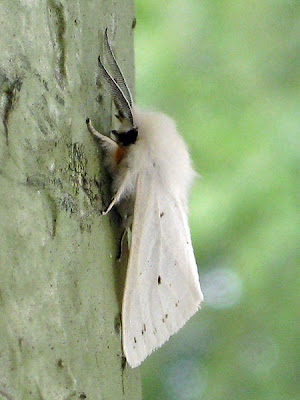 This species is often mistaken for tent caterpillars, because of the similar tent-like webbing that each species creates. The tent caterpillar however commonly occurs in the spring and they build a web home in the V's of trees, whereas the fall webworm is found in the fall (like its name suggests) and build their homes at the end of limbs. The fall webworm has a much messier tent than that of the tent caterpillar as well. So while these messy, webby tents are not that attractive to look at, rest assured your tree is safe and will be back next spring. The little caterpillars will most likely find a new tree to build their home in as the cycle starts all over again.
Posted by Shelly Cox at 11:33 AM