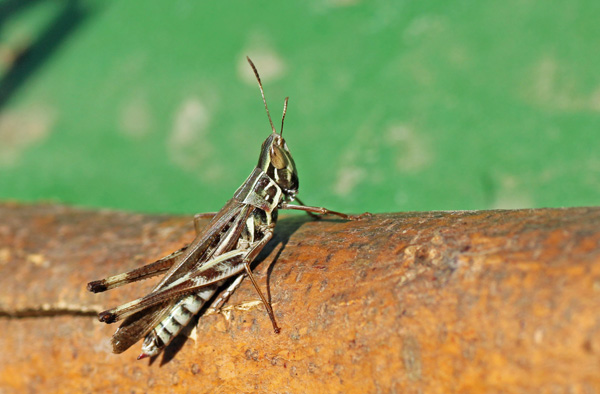 (male)
Admirable Grasshoppers (Syrbula admirabilis) are sometimes referred to as handsome grasshoppers and it is easy to see why. This is one of the prettiest species of grasshoppers to call Missouri home. They occur throughout the central and eastern portions of the United States including Arizona. Males and females look different from each other so it is somewhat easy to differentiate them. Males are darker, even blackish in color and are smaller than females. The females is generally green or brown. Males are good fliers, whereas females are poor fliers and typically hop to get away.  They are associated with dry grassy areas, like prairies, meadows and hay fields. 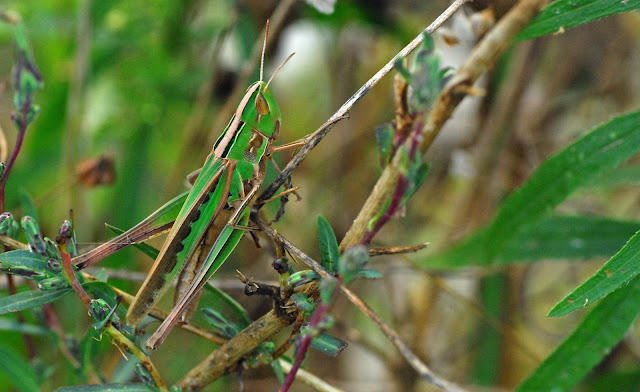 (female)
This grasshopper feeds on a wide variety of plants, but is not known to cause any significant damage to forage or agricultural crops. Their population density tends to fluctuate from year to year. I rarely see more that a few individuals at a time in any given area. This is a late emerging species and the nymphs begin appearing in July. Mating between adults takes place late in the season after an elaborate mating ritual initiated by the male. He will wave his antennae, sing loudly and tipping his femora (thick upper portion of the back legs) towards the female. The males do not force themselves on the female like in many other species. I guess you could say these are the gentlemen of the grasshopper world. Once mated the female will lay egg masses under the ground. These egg masses will overwinter and emerge the following summer.
Posted by Shelly Cox at 7:33 PM