For every creature that exists there seems to be something designed to control it or destroy it. Insects in particular have it rough. If it isn't enough that they must survive against onslaughts of pesticides and smack happy humans, they must also try to avoid the unavoidable, parasitic insects.

There are thousands of species of parasitic insects out there, but some of the most common are in the order Hymenoptera and are called wasps. The term wasp often brings to mind highly defensive komikazee insects that would just as soon sting you as look at you. While some wasps are highly defensive most are not, and the parasitic variety of wasps are completely harmless to humans. The only thing that need fear them are the insect quarry they are after. One particular group of parasitic wasps fall into the family Eulophidae. Wikipedia lists 4,300 species worldwide in over 300 genera. Several are plant parasites, but most are insect parasites. Each species has a preference for a host with many choosing caterpillars to lay their eggs on.

These are extremely tiny wasps at around 2 mm in size. They would easily go unseen by the human eye, if you weren't paying attention. In fact I can't say that I have ever seen an adult. The female will land on the back of the caterpillar, and use her sharp ovipositor to inject the eggs just under the surface of the caterpillars skin. She may lay dozens of eggs at a time on a single host. The eggs hatch in a few days and the young wasp larvae begin feeding on the caterpillars innards. For awhile the caterpillar will go about its daily business of munching leaves as if nothing is awry. Eventually, however the constant feeding of the wasp larvae will take its toll on the caterpillar and it will succumb to an early death. 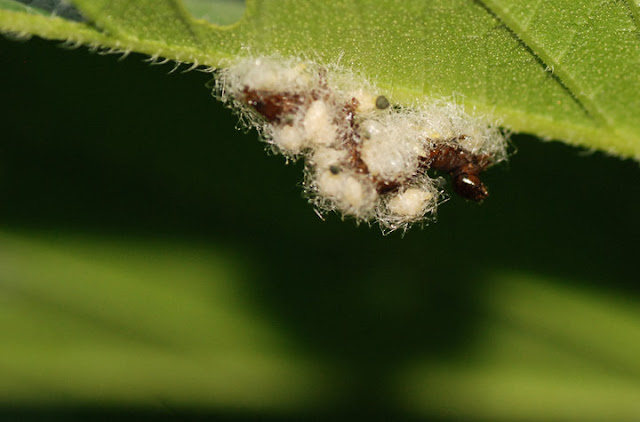 Once the wasp larvae have reached full size they will emerge from the skin of the caterpillar and form cocoons. These fuzzy-looking growths are the cocoons of a eulophid wasp. It has a very fungus-like appearance. In fact when I first found this unfortunate victim I thought it was some type of fungus. Charley Eiseman who is an expert in this type of identification was able to assure me that this is indeed a type of Eulophid Wasp infestation on the caterpillar.

Then I ran across this individual caterpillar with a similar infestation. This one was attached to a blade of grass, and in addition to the fungus-like cocoons of the eulophid wasp there are also visible eggs near the head of the caterpillar. Charley felt the eggs were from some type of tachinid fly and were probably laid after the eulophid wasps had already destroyed the caterpillar. 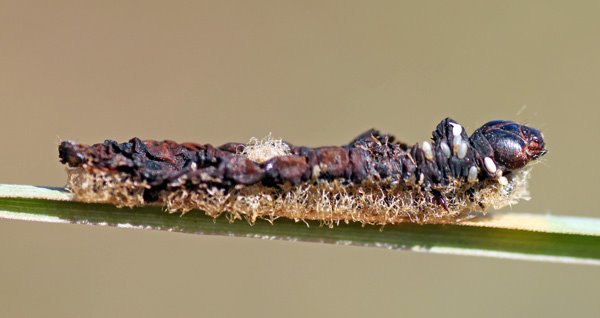 These are highly specialized wasps and provide excellent control of potentially harmful insects. Many moths in the caterpillar stage wreck havoc on crops and cause billions of dollars in damage annually. These tiny wasps certainly do their part in minimizing the damage these caterpillars inflict. They are so good at what they do that many species are being reared and released in areas where certain pests occur in large numbers. This is biocontrol at its finest. I am a firm believer in using what God gives us to control problem pests, rather than relying on manmade chemicals that have questionable outcomes on the environment.
Posted by Shelly Cox at 11:36 AM