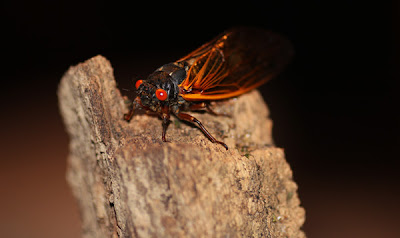 Periodical Cicadas are all the talk among entomologists in the Midwest this year. The 13 year brood has been emerging for several weeks now. The emergence began in Southeast Missouri and has progressed further north. The epicenter is in and around Columbia, MO. There are four species of 13 year cicadas all in the genus Magicicada.

Their coloration is distinctive: the body is black with red to orangish-red eyes, and yellow-orange wing veins. They are noted for mass-emergence of adults and the formation of choruses of singing males on a 17-year or 13-year period. Unmistakable as a genus---in order to determine species, examination of the underside of the abdomen is necessary.

Joey drove to Columbia, MO yesterday with his friend Doug to help move Doug's daughter back to KC. While he was there he said the noise these cicadas were making was deafening. He even spoke to the woman next door who told him that her dog cannot hear her call to him over the din of the cicadas. He described it as some exotic torture devised by Mother nature, an all out onslaught to the ears of high pitched screaming.  He described seeing thousands of them flying between the trees, and crawling all over the ground. He scooped one up to bring back to me (photographed here). 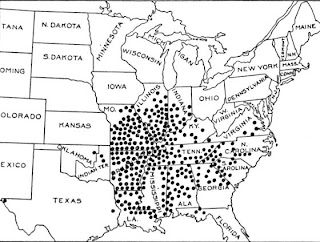 I was so excited that he thought of me and brought me one for my insect collection. It still remains to be seen as to whether they will emerge this far north in Missouri. The closest location to me I've heard they've been found is about 35 minutes south of where I live. I may have to investigate that location and see if I can find them. According to this range map they shouldn't be anywhere near me, including the location south of me where they were reportedly found...so we shall see what happens.
Joey hopes they don't emerge here....I on the other hand am praying they do!

UPDATE: My brother-in-law brought me about a dozen of these cicadas tonight (June 3, 2011). He found them in Fillmore, which is in Andrew County Missouri, in the NW Corner (white area on map). According to this range map they are not reported from there. We can now verify they are definitely in Andrew County. 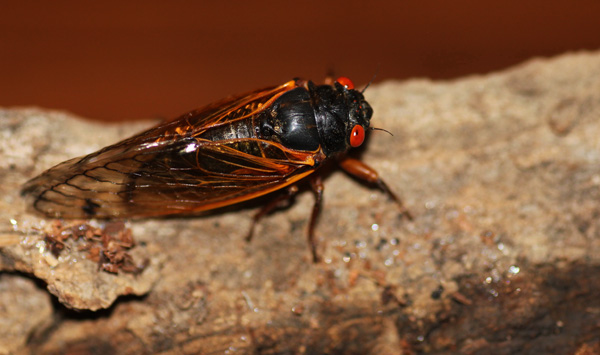