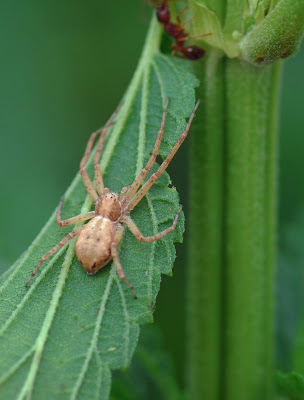 This photograph was taken last summer, and subsequently forgotten about. I came across it a few weeks ago and realized I had no idea what this spider was, nor could I even remember the circumstances behind taking the photo. I submitted it to Spideridentification.org and within 24 hours I had an ID on this modestly colored arachnid. It is a Running Crab Spider in the genus Philodromus and I have Eric Eaton to thank for the prompt identification. I often come across new or unusual insects and spiders that I simply cannot find in my field guides or I am at a loss where to begin looking. When these situations arise without people like Eric out there in cyberspace providing us this valuable information it would be very difficult indeed to name these creatures, much less learn anything about them.

Running crab spiders are native to the United States as well as most the World, and with 500 species it would seem they would not be hard to find. The fact is though, most of them are drably colored in shades of tan or brown and they very easily blend in with their habitats, so actually seeing these spiders might be more difficult than one would expect. They are a relatively large spider with a legspan around 1 1/2 inches, and like all crab spiders their two front pairs of legs are much longer than the other legs giving them a superficial "Crab-like" appearance. They are distant cousins to the traditional crab spiders (Thomisids) we find in our gardens among the flower blossoms. However these spiders differ in a few ways, for one they are much larger, and they lack the hairs that cover the bodies of crab spiders in the Thomisidae family.

These spiders do not build webs, instead they catch their food by sitting and waiting patiently for insects to pass by. They will reach out very quickly and grab their prey with their long front legs and deliver a deadly bite that injects their victim with venom. Some reports state that this venom is one of the most toxic in the spider world, which allows for them to subdue their prey quickly. Without a web to tangle up their food, like orb weavers use, it would be easy for prey to escape. Without having some means of quickly immobilizing their prey they would go hungry. This venom is not dangerous to humans, it is only dangerous if you happen to be fly-sized.

These spiders do however have silk, just like all spiders, although it is used in a different way. Instead of using silk to build webs, they use it to form drag lines to move from one location to another. Silk is also used by the females to create egg sacs that protect their offspring.These crab spiders can be found in a wide range of habitats, depending upon species. Some are associated with human dwellings and rest on the outside of buildings where they often blend in with siding or brick. Some are found in prairies and grassy areas, and still others prefer forested areas. Keep in mind when out exploring, some of the most fascinating creatures may be some of the hardest to see. Slow down, look around and discover what might be right in front of you.
Posted by Shelly Cox at 6:58 PM