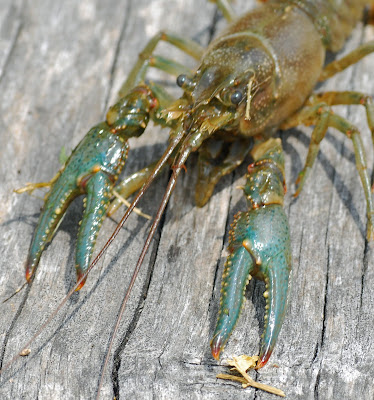 Invertebrates come in all sizes, shapes, colors and species. Anything from worms to lobsters are types of invertebrates. Of course we probably wouldn't eat a worm (except on a dare), like we would lobsters, shrimps or even crawdads. In Missouri there are 35 native species of crawdads, and most of these live in the clear waters of Southern Missouri.
Northwest Missouri has 4 native species, and I believe the one pictured here is the Northern Crayfish (Orconectes virilis). They are one of the most widespread species of crawdads in Missouri, and also one of the largest. They can range in color from reddish to greenish with green or bluish-green pincers with yellowish bumps (tuberacles). They are capable of reaching lengths to nearly 5 inches. This species is commonly found in streams with plenty of sheltered areas like rocks, logs and organic debris. They are also found in ponds as long as the pond is not overrun with large predator fish like bass. The one pictured here was captured from under a large rock along the shore of our pond. After photographing it I released it. It was quite large at over 4 inches in length. In late summer or early fall this species will most likely seek deeper water to avoid the winter freeze. They will lay dormant throughout the winter at the bottom of the water, often covered with silt. They will become active with the return of spring warmth.

Northern Crawfish breeding begins in July and typically ends when cold weather sets in. Breeding may start back up with the return of spring. Males of this species will dig a tunnel that mating takes place in as well as egg brooding. Young are born from May to June. This species is prolific and highly adaptable. They are commonly reared as a food species because of their large size and are probably favored birds, mammals and fish alike as a source of food. Most crawdads are nocturnal and only hunt at night, they will feed on a variety of decaying matter, both plant and animal. They are important links in the food chain because of their ability to breakdown dead plant and animal material that would otherwise not readily decompose. 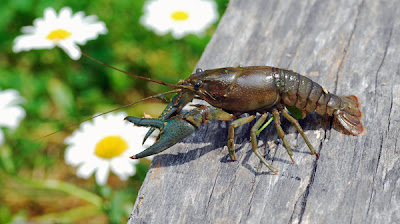 Crawdads are an important commercial and recreational resource in the United States. They are harvested for food not only as bait but also for human consumption. There are over 53,000 metric ton harvested annually, with 90% of those harvested coming from Louisiana. Many crawfish species are in danger of extinction because of inappropriate bait dumping. Many fisherman use crawdads as fish bait, and instead of disposing of their bait properly, they turn the crawdads loose. I am sure they think they are being more humane by letting the crawfish go, but in actuality it messes with the crawfish habitats. These non-native crawfish will often compete with native species for food sources. The non-native species will often mate with native species creating hybrids which in turn can cause the potential for extinction of native species. Often, hybrids are fertile and able to breed which can make it hard for native species to compete for mates. If you use crawdads as bait, remember to always throw your bait away, if this goes against your principles then return the crawdads to the tackle store where you bought them and return them. It is better to this than to releases them to wreck havoc on the aquatic environment.
Posted by Shelly Cox at 5:39 PM