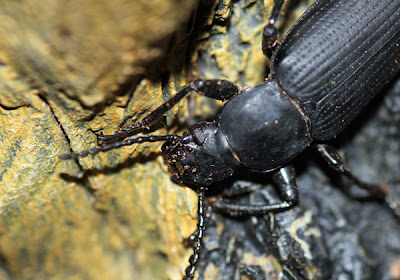 Darkling beetles in the family Carabidae Tenebrionidaeare ( Thanks Ted for catching my faux pas) one of the most common beetles in the pet trade. These larger beetles are called Zophobas morio and the larvae are called Superworms. They are native to Central and South America, but made their way into the United States because of their large size and easy to rear nature. Many captive pets prefer these larger worms in their diet, such as bearded dragons and other lizards, turtles, frogs, salamanders, birds and koi fish. Spiders and predatory insects may find them unpalatable due to their hard exoskeleton. The nutritional value of these superworms is comparable to mealworms so supplemental calcium should be used if these worms are a staple in your pets diet. The larvae are odor-free, although as adults they can give off an odor if provoked.
My bearded dragons "Lizzie and Dragon" love them and eat them as quickly as I give them to them. My daughter took a video of them with her I-phone (below).

Breeding populations can be started easily with just a few large size larvae. Place these larvae in individual containers with small holes in the lid. Do not feed them, and they will pupate faster. 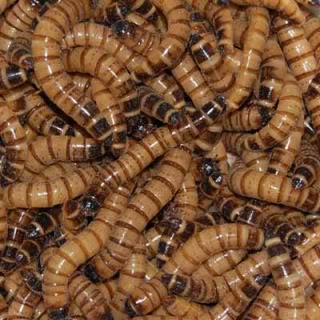 In a few weeks the larvae will begin to molt and resemble something that looks like a cross between the larvae and the adult beetle it is soon to become. They will remain light in color. After this pupation they will emerge ass the adult beetle. The adults will be yellowish in color, then reddish, later becoming black. It will take them 3 to 4 days to finish this process. The larvae can be kept together in smallish sized containers to prevent pupation. The crowded conditions and close proximity to their neighbors inhibits their growth to adulthood.

Both as adults and larvae they are sensitive to cigarette smoke as well as incense. Exposure to smoke seems to make them hyperactive and should be avoided. They will eat most anything, carrots, potatoes, beans, oats, fruit, vegetables and the peels of oranges and bananas are all good food sources for these beetles.

These beetles were frequently used in the popular show "Fear Factor" and were consumed by the contestants, usually in the second round. Could you consume one of these worms on a dare?
Posted by Shelly Cox at 9:56 PM