I received a phone call at my office the other day from a man living in Rushville, MO, which is a small rural town south of St. Joseph. He was excitedly telling me about a large colony of bees he has living in an ancient Burr Oak tree. He wanted to invite any of us in our office who wanted to see it to come on down. Today it was a beautiful day with temperatures in the low 70's so I knew the bees would be active looking for water and cleaning house so I called a friend and fellow naturalist Cindy. Her and I drove to the mans house, pulled in the driveway and this is what we saw..... 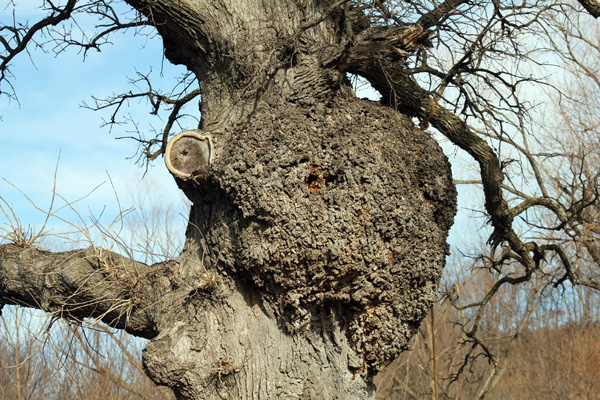 His driveway is approximately 15 feet from the tree and we could see the bees flying around the tree. We ventured closer and noticed the entrance hole and numerous bees coming and going. We immediately got our cameras out and began snapping pictures. Each time we got too close to the tree the bees would come over to us and bounce off our foreheads. Fortunately they were head butting us and not using their business end to scare us off. 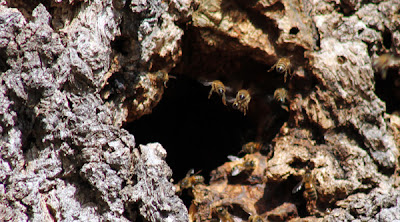 It was very hard to get clear shots of the bees because of their reluctance to allow us too close. We were completely in awe of this magnificent example of mother nature in action. We estimated the girth of this growth to be approximately 120-140 inches. What we aren't sure of is whether or not the growth was caused by the bees and their activity, or if the growth was there for other reasons and the bees just moved in. The bees have been there for decades and have divided and swarmed at least once in the past 10 years. (NOTE: I have since learned that the growth is called a "burl." According to three of my facebook friends (Thanks Marvin, James and Sean) who identified the growth for me, it was present long before the bees. The bees merely found it a suitable location to take up residence) 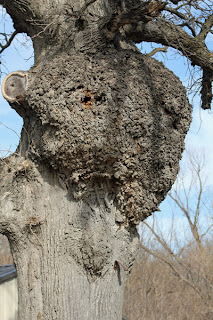 I was so happy to learn that this man is glad they are there and has no plans to try and remove them, even though they are literally 15 feet from his back door. He has been living there for 7 years and said they've have never been a problem and he has only been stung once, and said that was his own fault for swatting at one when it landed on his ear. Many people in his position would not be so forgiving and allow the bees to share their property. With the risk of stings and potential liabilities most people would have them removed immediately. I say Kudos to him for recognizing their importance and for exercising tolerance.