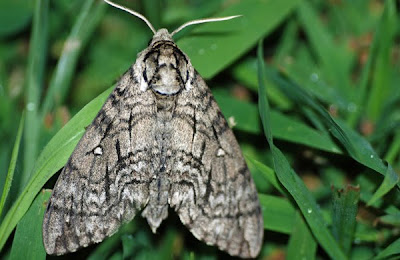 This pretty gray moth is a Waved Sphinx Moth (Ceratomia undulosa), they are found throughout Eastern North America. There are records from Oregon and Texas as well. These moths are large with a wingspan up to 4 inches. Of all the sphinx moths in NW Missouri this is without a doubt the most common one I see. They frequently come to a mercury vapor light that I have set up near our timber, sometimes as many as 3 or 4 at a time. Tonight however was the first time I had ever seen the caterpillar. It was feeding on an Ash Tree near our implement shed. The caterpillar was very large at almost 3 1/2 inches long and was a beautiful green color. 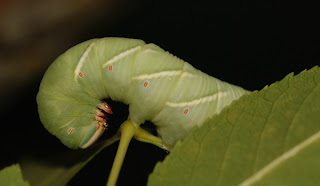 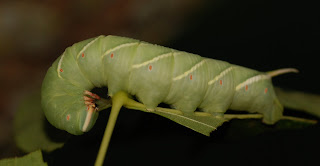 These moths are easily distinguished from other gray moths by two white spots located on the forewings. These spots are visible in the first picture. Mating occurs in the early to mid summer. Females lay their eggs on the host plant. For this species the hosts will be Ash, Lilac, Hawthorn and other woody plants. Some reports indicate they  may feed on Oaks, but this is probably in error.
The adults most likely do not feed. Look for them  in deciduous hardwood forests, orchards, timbered edges and suburban areas.
Posted by Shelly Cox at 8:58 PM