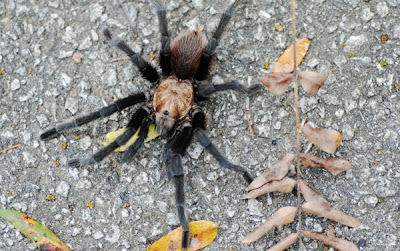 This very large tarantula was found during our stay at Truman State Park. It was crossing a roadway near the park, and I told my husband to stop....well...screamed is more like it "STOP!!!!" I jumped out of the car, grabbed a container and ran back to where the spider was. I tried to coax this HUGE spider into a very SMALL container, and quite simply put "it did not want to go!!!" She/He reared back, showed their fangs and then did the unthinkable! It ran AT me. I began doing a very creative spider dance in the middle of the road trying to keep this huge spider from climbing my leg like a tree. I also did not want to accidentily step on it or hurt it. Finally I was able to safely place the container over the top of the spider and it crawling up on the side and I was able to slide the lid underneath and safely secure it. We returned to the campsite and the kids next to us wanted to know what I had found. I showed them and they were in awe of such a large spider. The next morning we began packing up to leave for home and I told the kids we could let the tarantula out of its container so they could watch it. They were so excited and came running over to watch. I opened the lid and this spider very gracefully and slowly crawled out onto my hand and behaved very nicely. It was certainly nothing like the freaked out spider from the night before. Of course I must admit that having a very large alien trying to grab you and shove you into a container might make anyone freak out. We watched it crawl around for quite sometime and took some photos. We were all surrounding this spider looking down on it, and it just meandered along as if oblivious to our presence. After about 10 minutes I let the little girl help me corral her again and safely place the lid on the container. She wanted so badly to take this gorgeous spider home with her and just kept saying how cute it was. The parents relented on the walking stick but held firm on NO tarantulas....LOL
Awhile  back I posted about a Tarantula I had purchased from a breeder, it is also the same species we caught at Truman. I bought her as a final step in overcoming my fear of spiders. I've often eluded to the fact that spiders terrified me. If you would like to learn more about these beautiful, large spiders that call Missouri home Oklahoma Brown Tarantula.
Posted by Shelly Cox at 12:27 PM