This one is for Caleb---YellowJackets mistaken identity 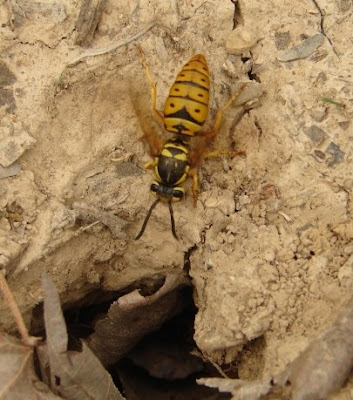 (Yellow-Jacket Queen)
When I heard about young Caleb's unfortunate encounter with a nest of yellow-jackets I couldn't help but feel sympathy for his experience. His father said he had over a dozen stings and now is very uncomfortable being near any bees, especially the ones near their bird feeders. I can certainly understand how anyone would feel this way after having such a bad experience. His father asked me if I would post an entry about Yellow-Jackets and I am very happy to do so. Caleb my hope is that after you read this you will have a little better understanding as to why those wasps were so angry with you and what prompted them to sting so viciously.
Eastern yellow-jackets belong to a family of wasps called Vespidae, also within this family are the paper wasps. Like paper wasps, yellow-jackets build a papery nest out of chewed up bits of wood and saliva. These nests are most generally found underground, but can also be found in hollow trees or even in hay piles as the one pictured here. In the spring, bred females become active as soon as the weather begins to warm. She will seek a suitable nesting site and begin construction of her new home. She will lay eggs in small chambers (cells) within the nest and feed these young chewed up bits of insects herself. Once these young have grown to adulthood, they will take over the care of the queens offspring, and the queens sole purpose will be to lay eggs. These new wasps are referred to as the workers and their job is to not only care for all their siblings, but to expand the nest and to defend it. It was this defensive nature that Caleb learned about up close and personal. Yellow-Jackets give off a pheromone (chemical perfume) that alerts other members of the hive when danger is near. When one yellow-jacket is alerted, it isn't long before many are also on the defensive. If you happen to wonder too close to their hive they perceive this as a threat and attack accordingly. They are estimated to be responsible for over half of all stings from any wasp or bee. Although it is truly nothing personal, they are doing what nature designed them to do, defend their queen, their siblings and their home. Much like a father would do, if someone threatened his family or home. While he may not possess a stinger on his rear end, he certainly would use whatever was at his disposal if he thought there was a threat to his family or home. 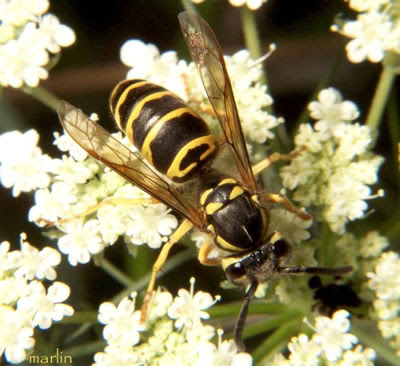 (Yellow-Jacket female foraging)
Each hive can contain up to 5,000 members, which sounds like a lot, but really that is a small hive when you consider that honey bees will have up to 50,000-60,000 members.
Late in the summer the male yellow-jackets appear on the scene and begin looking for young females with which to mate. After mating, and when cold weather begins to set in all in the hive will perish except for the bred females. These females are destined to be next years queens. They will spend the winter months in hiding, under leaf litter or in hollow trees. 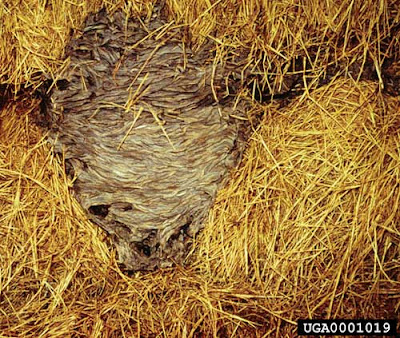 Fortunately for us Yellow-Jackets aren't always so aggressive, usually while out foraging for food they are docile. If provoked they will defend themselves, and can sting repeatedly. They are attracted to sweet substances and are often encountered at ball games, picnics, etc., where pop and other sweet drinks are plentiful. They are commonly seen crawling all over pop cans or edges of cups sipping up the sugary treats. Because of their resemblance to honey bees, many people mistakenly refer to them as honey bees. It would be very unlikely to encounter a honey bee on your pop can, they instead prefer flower nectar and pollen. Honey bees often get a bad rap because of the yellow-jackets. One thing to remember is: Yellow-Jackets are wasps, Honey Bees are bees. Honey bees can only sting once then they die, not so with yellow-jackets. Honey bees have fur, whereas yellow-jackets are smooth. Honey bees are milder in temperament and aren't as easily provoked. Yellow-jackets are more easily irritated. Another bee that is often mistaken for yellow-jackets is the cuckoo bee, they mimic yellow-jackets so closely it would be very hard to tell the difference. I assume this extreme mimicry offers them protection, after all if you look like a big bad mean wasp, not much will mess with you. 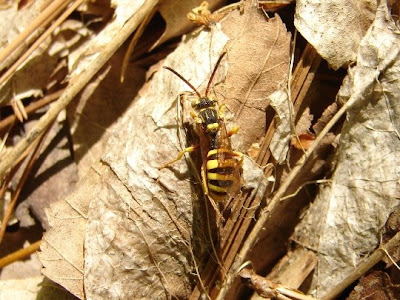 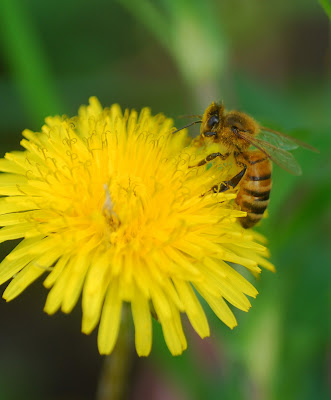 Caleb, I hope this helps you better understand these little wasps. Try to not be afraid, the ones that are at your bird feeders are most likely not going to cause you any harm. They are merely looking for something to feed either themselves or their younger siblings. Getting too close to the nest is never a good thing as you found out, but I hope you don't let it discourage you from respecting these amazing insects. While they do tend to be aggressive by nature, they are beneficial in respect to all the insect pests they kill and use to feed their offspring.