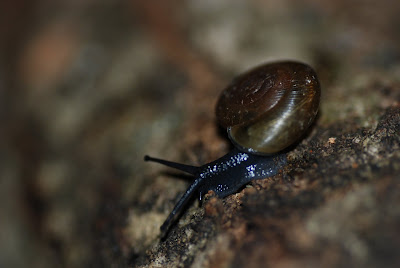 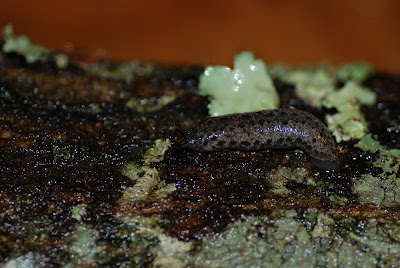 Now, I realize this site is devoted to Insects and their closely related kin, I just couldn't resist posting about some other interesting creatures that most of us have come in contact with at one time or another. Snails, and slugs fall into the phylum Mollusca. Whereas insects are in the phylum Arthropoda. They are completely unrelated, and the only similarities you are likely to find is their existence in your garden right along with beetles and butterflies.

Many people are completely disgusted by slugs, which I have always found humorous. I remember when I was a little girl my grandmother and grandfather were overwhelmed with a huge population of large slugs in their yard. My grandma would hand me a box of Morton salt and send me outside to dissolve the slugs. I remember thinking how cool it was to poor salt on the slug and watch it shrivel into a mere shell of its former self. I had no idea as a child why this phenomena occurred, only that it fascinated me. As an adult I know that slugs are mostly water, and the salt dries them up. I guess I've grown soft in my old age because I wouldn't pour salt on one of these little critters now, although one day when I become a grandma I might pass the Morton salt to my grandchild and let them be as fascinated as I once was. 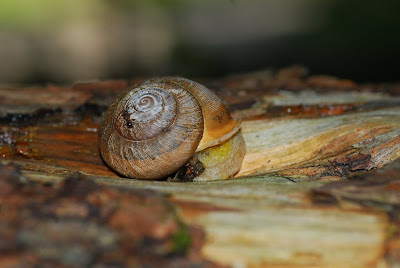 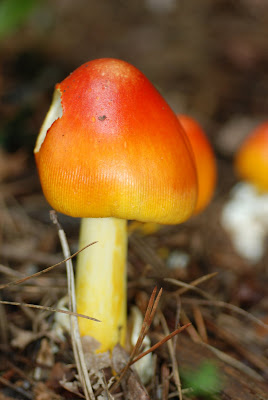 The ones pictured here were all photographed in Tennessee. The first two were near the cabin, residing in a pile of wood. The Third picture is of a large snail (almost ping pong ball sized) found in the forest of the Smoky Mountains, it had been feeding on the Caesar's mushroom pictured in the last photo (if you look closely at the photo you can see on the left hand side the little bites taken out of the mushroom, leaving the white meat exposed). Slug is a non-scientific name given to gastropod molluscs that do not have shells, or have greatly reduced shells, or perhaps a tiny internal shell. All slugs are decedents of snails, and have lost their impressive shells for one reason or another. The lack of shell to retreat into leaves them vulnerable to outside influences. Land slugs are prone to drying out, and therefore must remain in moist locations. During times of extreme dryness they will retreat to hiding places where the moisture levels are higher. Slugs produce slime, this is a form of protection. The slime serves several purposes, it makes them slick and hard to grab, which aids them against possible predators which may find them hard to grab a hold of. Two types of slime are produced, one is a thin mucus, this particular slime is produced in the center of the "foot" and spreads to sides. The second mucus is a thicker variety and is spread out from the head to the tail. The slime trail left behind by the slugs helps other slugs identify members of their own species. Which is helpful when mating season begins. Some species are capable of creating a slime cord from which they suspend themselves in the air during copulation. It also aids the slug in traveling, as the slime contains fibers which help them grip vertical surfaces. Slugs are hermaphrodites, meaning they have both male and female organs. Once a mate has been located they will entwine and fertilize each other. The male sex organs are cork screw shaped and sometimes become lodged within the female sex organ during the exchange of sperm. If this should occur one or the other will chew the entangled organ off. As horrible as this sounds, it does not keep the slug from mating. The female organ will still be fully functional and it will continue to mate as a female. In a few days, they will lay 30 eggs in a damp location under logs or vegetation or in a depression in the soil.
Slugs are of economic importance, as they predominantly feed on decaying vegetation, such as leaves, and fungus (the mushroom). Some species are predatory and feed on small land animals like other slugs or snails or even earthworms. They will even dine on carrion. There is a small population of slugs that are harmful to plants and crops, because they feed on green and growing plants, often becoming a pest in greenhouses.
Snails are closely related to slugs but differ from them by having an interesting coiled shell they carry around with them. Large numbers of snails are associated with water and are found near oceans, lakes, ponds and rivers. A few like the ones pictured above reside in moist environments like forests and woodpiles. The shell is made up of calcium carbonate that is secreted from the snails body. Snails require a diet high in calcium to continue producing the chemical that creates the shell and hardens it. Land Snails, like slugs possess both female and male organs and reproduce similarly to slugs. The difference between the species, is that land snails perform a mating ritual beforehand. This ritual varies by species, and can last up to 12 hours. Snails are prolific breeders and may lay clutches up to 100 eggs. Land snails are usually herbivores, and eat bark, leaves, decaying vegetation, fruit, fungus, etc. Some species are carnivorous and will eat other small soft bodied creatures like caterpillars. These creatures are common and easily found, but are truly fascinating in their simplicity. If you can resist the urge to pour salt on them, take a few minutes and just watch them, graceful in their movements and unassuming in their existence.
Posted by Shelly Cox at 9:47 AM