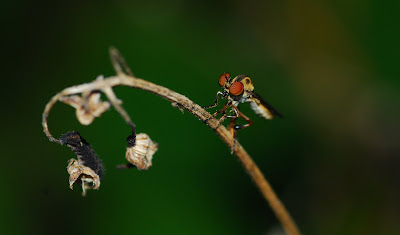 This super tiny robber fly in the genus Holcocephala is found throughout the eastern portion of the United States. There are three species within this genus and all of them are located East of the Rockies. Measuring 1/2 inch or less they are the smallest robber flies encountered in their range. The wide set eyes is a key characteristic of these flies and distinguishes them from any other robber flies. They are often referred to as Gnat Ogre's because of their diet, which consists almost entirely of gnats. Look for them in grassy open areas where they will perch on small stems or twigs waiting for dinner to pass by, and with the huge populations of gnats I'm sure they have no trouble whatsoever in finding plenty to eat. Start looking for them now during the mid summer months, when their numbers increase. Keep in mind their small diminutive size when searching for them, they would be easy to pass by without ever knowing they are there.
Posted by Shelly Cox at 9:31 AM