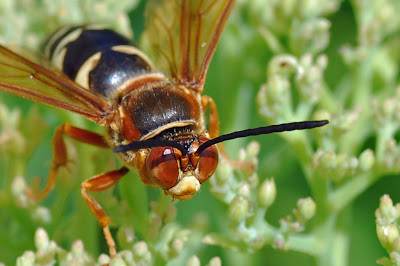 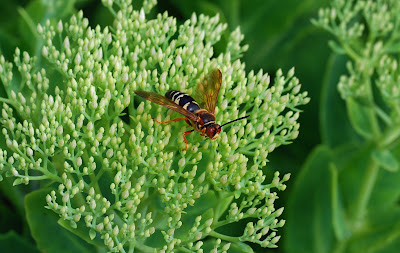 Eastern Cicada Killers (Sphecius speciosus) are large wasps, reaching lengths up to 1 1/2 inches. They are very common east of the Rockies and are found at woodland edges, in gardens and waste ground. They are easily identified, their head and thorax are rusty colored, and their bodies are black and yellow banded. The wings are a clear amber color. Adults eat very little, but will take nectar occasionally from various flowers. After mating, the female begins looking for a suitable site to dig a burrow. She will then look for food to provision this lair. As their name implies they hunt cicadas. Once an unfortunate victim has been located she will sting the cicada to paralyze it, she then carries it with her massive legs to the burrow. Once entrenched in the burrow she will lay an egg on the very much alive but unmoving cicada. The egg will hatch in a few days and the newly born larvae will feed on the food provided by its mother. After consuming the cicada, and when nothing but a shell remains the larvae will pupate. It will remain in this restive state until the following spring, when it will emerge as a full grown adult and the cycle will repeat itself. These wasps usually become abundant in the mid summer months with the return of the cicadas. They are not known to be aggressive, as with most solitary wasps they have nothing to protect. Colony bees or wasps tend to be much more aggressive as they have a queen, hive and larvae to protect. If you were to swat or otherwise antagonize one of these wasps make no mistake it would defend itself, and a sting from one of these large wasps would be an experience you wouldn't soon forget. The one pictured here was drawn to a sedum and had been hanging around this same plant for over a week. It seemed like unusual behavior, especially since the plant wasn't blooming. It allowed me to approach it to within a foot and take pictures. Occassionally darting out to chase off other wasps. They are beautiful, intimidating looking insects with a fascinating life cycle.
Posted by Shelly Cox at 9:21 AM