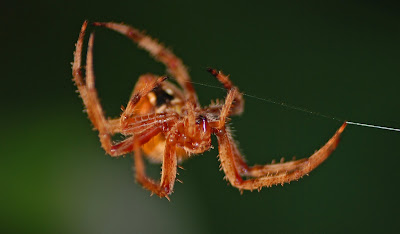 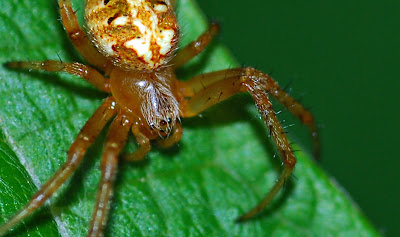 This gorgeous spider is the Arabesque Orb Weaver (Neoscona arabesca), they are one of the most common orb weavers in North America. They can be found in a wide variety of habitats, but tend to prefer woodlands. It is not uncommon to encounter several of these spiders all within just a few feet of each other. These spiders are very efficient at insect control, with such large populations of them it stands to reason that they consume untold amounts of insects. While they aren't as flashy as some orb weavers such as the Black and Yellow Garden Spiders, they are certainly pretty in their own right. With golden coloring and bright white and golden abdomen they certainly stand out. One distinguishing characteristic of this species is the dark brown comma shapes on their abdomen, which are visible in the second and third picture. Each day they consume their web and build a new one. Silk is a valuable commodity and none goes to waste. Building a new web insures that the silk is strong enough to hold any insects that become ensnared 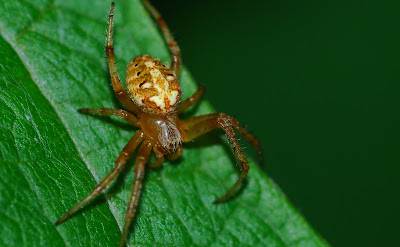 within
it. I have tons of these spiders in my
yard and have to dodge the webs, as they tend to build wherever the mood strikes them. I cannot tell you how many time I've walked directly into their web, this freaks me completely out. I've invented some pretty unique dance moves, as I try to detangle myself from these sticky webs. Then I imagine the spider on me somewhere, which starts the fancy footwork all over again. EWWWW! I like them just fine in their web munching away on insects, but when they invade my space....GAME ON!
Posted by Shelly Cox at 9:26 AM