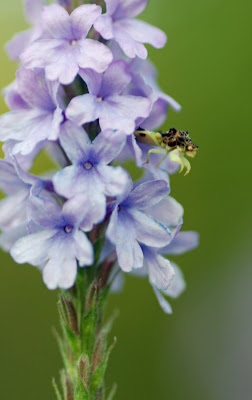 Ambush Bugs in the genus Phymata are little predators measuring about 1/4 to 1/2 inch in length. They are found throughout the Eastern United States. Look for them in meadows, open fields, prairies, almost anywhere there are wildflowers. They seem to be especially abundant late in the summer and early fall when the goldenrod begins to bloom. Ambush bugs prey on insects in all stages of life. After mating, females will lay eggs in small clusters on the leaves and stems of plants. After hatching, the wingless nymphs will begin hunting for tiny insects to feed on. They will complete four molts (instars) before reaching adult size. Some species may take up to seven molts. The adults will overwinter in a secure place, probably among leaf litter or at the base of plants under vegetation. These bugs almost always hunt for their insect prey on flowers. They are able to fly but they rarely do so as they are weak fliers. Because of their coloring in shades of greens and browns they blend in well with their surroundings and are often overlooked. As you can see by the above picture they would be great at "ambushing" their prey. They are capable of sitting completely still, and will remain unmoving until a likely, delectable dining option comes along. They will then reach out with their longer front legs and grab the unsuspecting insect and pull the squirming little morsel into their mouth.
Posted by Shelly Cox at 10:05 PM