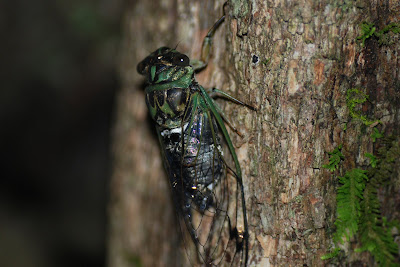 Probably one of the most recognized sounds of summer are the cicadas, droning loudly from the tree tops. These noise makers are the males looking for females. If he sings, loudly and proudly, with any luck he will attract a nearby female who finds his song divine. Once mated, the female will cut slits into trees or twigs and deposit her eggs, often she will lay hundreds of eggs. Once the eggs hatch, the newly born nymphs will drop to the ground and burrow into the soil. They will remain there for as a little as two years to as many as 17 years (for periodical cicadas). They feed on the plant and trees roots. At the final instar they will construct a tunnel to the surface and emerge. They then crawl to a nearby surface and molt for the last time, after shedding this skin they become the adult we are all familiar with. The one pictured here is Robinson's Cicada (Tibicen robinsoniana). This particular species was photographed in Townsend, TN near the cabin where we stayed. They have a patchy, localized distribution. Often found along rivers, they are reported to be hard to find and to collect. I feel fortunate to have found a few, and not knowing for sure what they were, only that they appeared a little different from species I had seen at home in Missouri. I sent an image to Bugguide and Bill Reynolds was able to ID it for me. The one pictured is a male. After looking at their distribution, I discovered that there is a small population of these in Missouri as well, in the southern portion of the state, almost to the Arkansas border. The singing period for Robinson's is shorter than most cicada species, and they will typically stop calling after the first light frost or two in September. 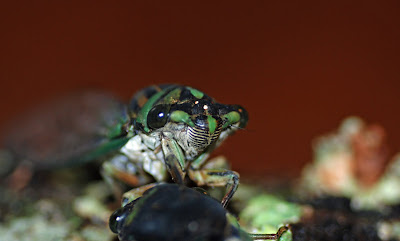 Cicada's in the Genus Tibicen are referred to as the "Dog-Day Cicadas", this comes from their arrival with the hottest days of the summer. As we sit and wilt in the heat, they chant loudly as if they were paying homage to the hot temperatures. They sing to not only find mates, but to confuse predators, after all they have no means of protection, they aren't poisonous, they don't sting, or bite....so they sing in large numbers. As many of you know, hundreds of these all singing at once can be brain numbing in its intensity. This large chorus line makes it difficult for predators to locate any single cicada to dine on. Many myths surround cicadas, and they have been revered throughout history. Individuals in ancient Greece and China believed cicadas were the resurrected souls of departed loved ones. This belief came from the life cycle of the cicada, they live the largest portion of their life underground, emerging in the summer. After they shed their exoskeleton and take flight for the first time they are very clumsy and often bounce off objects, including humans who may be standing nearby. This transformation was viewed as being an ethereal reincarnation of deceased loved ones. They were viewed as being immortal. In Taoism the cicada was seen as a symbol of the soul leaving the body after death.
Cicada's are used in medical treatments for common human complaints such as earaches. In China the shed skins of the cicadas are ground up to form a powdered medicine that is used to treat, fevers, skin rashes, pink eye, cataracts, blurred vision, restless sleep, nightmares and various other ailments. Cicadas have been used for thousands of years in art, and were even depicted on coins before the time of Christ.
Cicadas are often called Locusts, but they are in a completely different family of insects. Locusts are related to grasshoppers and crickets in the family of Orthoptera. Locusts often swarm in large numbers and can cause catastrophic damage to grasses and crops, eating everything in sight. Cicada's on the other hand are in the same family as true bugs, Hemiptera, and subfamily Homoptera. Cicada's go by other localized names like "Dry-Fly" from the shed skin they leave behind, and are also called "Jar-Flies". In many parts of the world they are consumed, and the females are prized for their meatiness. They are skewered and stir fried as a delicacy. YUM---stir fried cicada, when do we eat?
Cicada's face other predators besides humans, this includes birds, and cicada killers, as well as our pets. While not known to be poisonous, they can make our pets vomit or give them diarrhea.
Each individual species has their own song, and they can be identified by their song alone. They make these loud noises with specialized organs called Timbols. They vibrate these organs located on the sides of the abdomen by expanding and relaxing the membrane.
For me as for many of us, the true symbol that summer has arrived is the arrival of the Cicada's Song. There is nothing more enjoyable than sitting outside on a muggy summer evening, sipping on a cool drink taking in the sounds of summer.
Posted by Shelly Cox at 11:59 AM