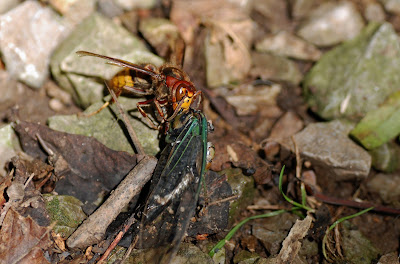 This impressive looking wasp is the European Hornet (Vespa crabo). We encountered a few of these near the cabin where we stayed in Townsend, TN. One of the neighbors owned a large yellow lab,she visited us often. She was old and as sweet as can be, she had a taste for these wasps and kept capturing them and eating them, even when it was apparent that the wasps were stinging her mouth. We could not figure out why she would endure such a painful sting to eat these little morsels. The one pictured here was chewing on a cicada near the driveway. These large wasps are native to Europe, and were first introduced to North America in 1840 where they made their appearance in New York State. Their numbers are greatly reduced in their native country, especially in Germany where it is illegal to harm them in any way. In fact if you kill one you could face a possible fine of up to 50,000 EURO which translates into $70,520.36 USD, which would be a hefty fine for killing an insect. Their introduction to the United States has given us our only true hornet. They are quite large and reach lengths up to 1 1/4 inches.
Many myths surround this wasp, one in particular hints at it being very aggressive. Some have said "Three stings will kill a human and seven stings will kill a horse" This is a huge exaggeration. While large and fairly loud as they buzz by you, they are not known to be aggressive, except when defending their hive. In fact if approached away from the hive they have the tendency to back away from you until they can safely fly away. Near the nest is another story, they will defend their hive very aggressively. A sting from one of these large wasps would be a nasty experience, it is reported to be terribly painful. Just like other wasps, they can sting numerous times, and the pheromone(chemical perfume) they exude would send up an alarm call to other members of the hive, and before long several of these wasps would be on the scene with one goal---to get you away from the hive (perhaps this is why their species name is crabo?) If you are feeling adventurous and would like to see a hive in action up close, approach slowly, and DO NOT breathe(The carbon dioxide you breathe out would alert them to your presence) towards the hive, you may be able to get within 20 yards of the hive undetected. Good luck.
In the spring, bred females become active with the return of warm weather. They will begin seeking out suitable sites for nest building, once she locates a likely spot she will start building the trademark papery nest. Usually this will be within hollow trees, but often they will build in human structures such as barns, attics and old houses, sometimes even building in the spaces between walls. It would probably be undesirable to have them in your homes as their hive often leak a residue that can be very stinky. This stench would be unwelcome in your home. The queen will begin depositing eggs within cells in the hive. She will feed these larvae herself and care for the hive. Once 5 to 10 newly emerged workers (females, that are incapable of reproducing) appear they will take over the care of the offspring and the hive. At this point the queens only purpose is to lay eggs. The hive usually reaches its full size by September, with a maximum of 1,000 workers, which would be a large hive. An average hive will have around 500 workers. These wasps are typically found in woodland areas, and with more and more people moving to the outskirts of town, and with the expansion of this wasps range, expect that you may come in contact with them. They are attracted to lights at night, and this may be due to the fact that other insects are also attracted to your porch lights. These wasps attack and kill insects, masticating (chewing) them and taking the nourishing substances back to the hive where they feed to the growing larva. The larva are fed exclusively bits of chewed up insects, and cicadas seem to be a favorite of the workers, perhaps because they are easy to capture and provide lots of food in one package. The adult workers need a lot more energy than what eating insects can provide, so they prefer to dine on sugary substances like sap or nectar. They are even known to feed on apples and peaches, often destroying the fruit. The larvae exude a sugary substance that the adult workers are able to feed on. Perhaps this is a thank you for all the hard work they perform in keeping them fed with bug juice. They are not known to favor human garbage or picnic favorites like pop. One interesting fact of these wasps is their relationship with a certain Rove Beetle (Velleius dilatatus). This beetle lives within the hive, feeding on the detritus (Organic matter, which includes fecal matter and the dead wasps). This beetle cannot survive without the wasp, even if there is limited amounts of detritus within the hive. These beetles locate the hive by smell, and there are usually around 10 beetles within each hive. In the fall the queen will lay eggs that are destined to be males and new queens. Shortly afterwards the queen dies. Once these new adults emerge they will seek mates. After mating, the males die, and the new queens will look for areas to overwinter. Usually in leaf litter or in hollow trees. The following spring the bred queens become active and the cycle will start all over.
Posted by Shelly Cox at 9:15 AM