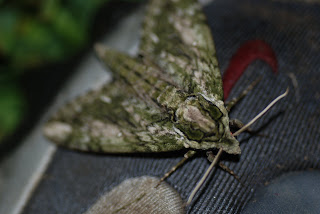 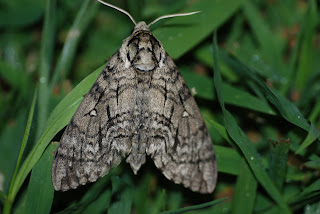 Sphinx Moths or Hawk Moths as they are sometimes called are one of the most easily recognized moths in North America. They are triangular in shape while at rest. Usually very drably marked forewings, but often times brightly colored bodies are tucked away underneath. A couple of common ones found in Missouri are pictured here. The first is the Pandora Sphinx Moth (Eumorpha pandorus). The second is the Waved Sphinx Moth (Ceratomia undulosa). Both species are found throughout Eastern North America. The Pandora Sphinx can reach wingspans of 3 1/2 inches. The are multi-green in color, making them look like army camouflage. They have a distinctive pink eyespot on each wing. Males have large feathery antennae. After mating, the female will deposit eggs on the leaves of the host plant. In the case of this species it is Grapevine or Virginia Creeper. Adults will nectar at flowers usually at dusk or dawn. In Greek mythology the character of Pandora was put in charge of a box. Contained within this box was all the world's evils, including ills, wars, toil, sickness, but lastly was hope. She was told by Zeus himself to not open the box. I'm sure all of you can guess what happened next....yep, she opened it! Her actions released all the World's woes. Quickly realizing her mistake she closed the box in time to save hope. The second moth is the Waved Sphinx, they are very common, and I find lots of them at pole lights or at my mercury vapor light. Not quite as colorful as the Pandora, they are still a lovely moth. They are varying shades of gray and black with a distinct "wavy" pattern on their forewings. Each forewings contains one white eyespot outlined with black. Larger at 4 to 4 1/2 inches they make quite a showing when they flutter about lights at night. The adults of this species probably do not feed. After mating, the female lays her eggs on the leaves of Ash or Oak. The young caterpillar grow rapidly and right before pupation will take on a pinkish hue. Look for them in deciduous woodland, orchards, timber lines, forest edges and suburban areas. Many sphinx moths call Missouri home, this is but two of the more common ones.
Posted by Shelly Cox at 9:26 AM