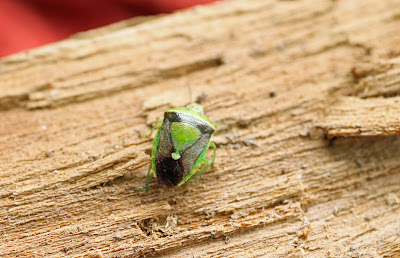 This beautifully colored stink bug is the Banasa Stink Bug (Banasa dimidiata). They are widespread throughout the United States and parts of Canada. Many stink bugs feed on plants and still others feed on pests which feed on plants. This particular species is a plant feeder and seems fond of berries, especially blueberries. 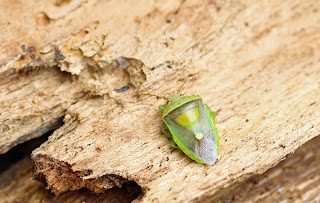 Stink bugs belong in the order Hemiptera and possess piercing-sucking mouthparts called a proboscis, rostrum, or beak. They use this beak to inject enzymes into plants or insects to help break down tissue and allow the stink bug to more easily consume its choice of food. Stink bugs also possess a rather noxious defense from which they get their common name. When threatened by a potential predator or sufficiently harassed, they will emit a foul smelling odor that is designed to deter their attacker and give them a chance to escape. Most likely it is just as simple as this odoriferous concoction just plain tastes terrible and once a would-be predator gets a taste of it it thinks twice. Stink bugs have very few predators. If you've ever smashed a stink bug inside your home or vehicle you will know exactly what I am talking about. 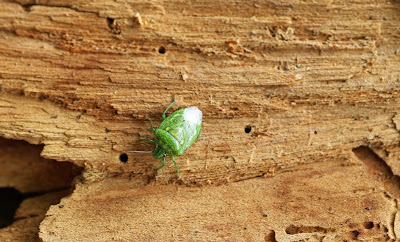 There are 11 different species of stink bugs within the genus Banasa, another one is the Juniper Stink Bug, or Jade Stink Bug (Banasa euchlora). Like their cousin the Banasa Stink Bug they are on the small side at only a few mm in length. What they lack in size they make up for in beauty. They too are widespread throughout much of the United States and are associated with species of junipers. They feed on the juniper berries. Both of these species, like many other stink bugs are attracted to lights at night. I commonly found them at the white sheet and mercury vapor light I put out in the summer months. 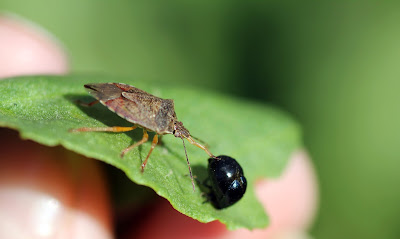 The Spined Soldier Bug (Podisus maculiventris) is one of the most common stink bugs in our area. They are predators of other insects as you can see pictured right as this one feeds on a Green Dock Beetle. Stink bugs are often the first insects I see in the spring when the weather begins to warm up. Most species spend the winter as adults hiding out in leaf litter, under the bark of trees or other protected areas.  The first thing on their mind after waking up from their winter nap is food, but a close second is mating. Many species produce several generations a year. The female will lay a tight cluster of tiny barrel-shaped eggs on the leaves of various plants and trees. 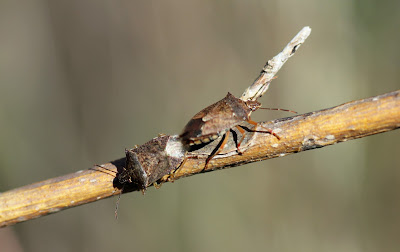 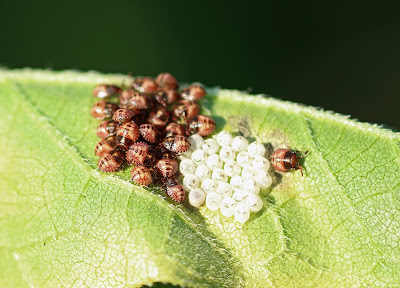 Many species are considered significant pests of agricultural crops and can cause millions in damage each year across all types of crops meant for human consumption. These plants may include corn, soybeans, peaches, pecans, blueberries, grapes, etc. One less common species is pictured here (above & right), The Lugens Stink Bug (Mormidea lugens) is found in the Caribbean, Central America and North America. It rarely, if ever occurs in large numbers. They are a few mm in length and beautifully colored with a dark bronze tone trimmed in white. Various types of grasses and sedges are their food preference. 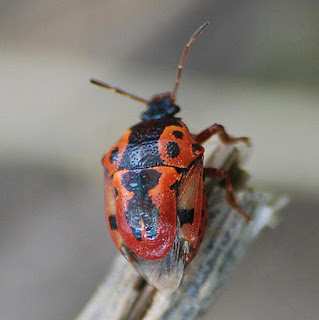 The Anchor Stink Bug (Stiretrus anchorago) comes in many different color forms, there is an all black variety and also red & black, and white & black. The overall pattern is highly variable as well, but most specimens will have an anchor-like pattern on their abdomen. This medium-sized stink bug feeds on the caterpillars and grubs of butterflies and beetles. Their feeding habits could be considered beneficial to agriculture as they seem to prefer dining on insects that cause significant crop and plant damage including the Mexican Bean Leaf Beetle, Cabbage White Butterfly, the Alfalfa Weevil, the Soybean looper and many others. While their prey preferences makes them helpful in controlling pest populations, they however do not occur in large
enough numbers for them to be considered HUGELY beneficial. 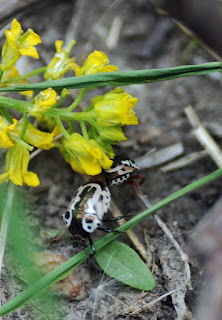 Plus we have to consider that they
are actually a generalist predator, meaning they will eat most any insect they can catch. This includes the pest species mentioned above, but may also include those insects we don't mind having around like ladybugs and swallowtail butterflies.

Anchor Stink Bugs, or Anchor Bugs are found throughout the Eastern United States as well as California. You will find them in agricultural areas in the grassy strips next to crop fields. Look for them in open fields and in fence rows as well.

Like all stink bugs they really don't have many predators, but there is a species of tachinid fly that will use this species to deposit it's eggs on. The fly larvae will then feed on the stink bug. 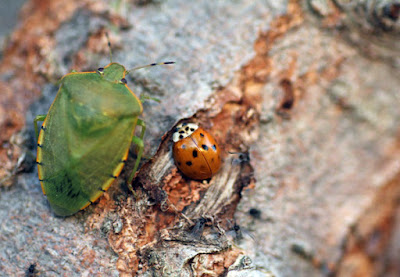 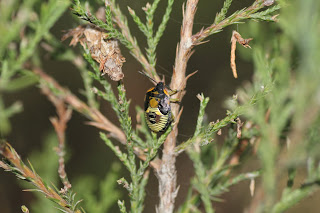 The Green Stink Bug (Chinavia hilaris) is probably the most common stink bug I see here on the farm. They are large at up to 1/2 inch or a little more in length. Body is green with yellowish margins. 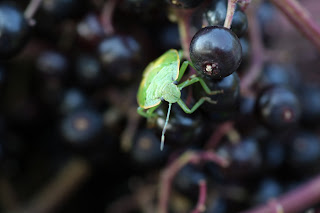 They feed on a wide variety of plants and seem to develop a taste for the seeds. Tomato, bean, pea, cotton, corn, soybean, eggplant are some of the preferred plants they may becomes pests of. If seeds are not available they will feed on stems and leaves and may damage a variety of fruit trees including plums, peaches and apples. They often congregate in large numbers on the sides of trees in autumn. The larvae of this species (above left) is beautifully colored and easily identified. 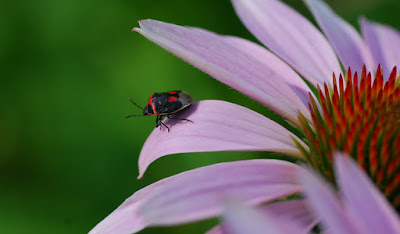 This tiny stink bug is the Twice-Stabbed Stink Bug (Cosmopepla lintneriana). Their common name comes from the two bright red "stab marks" on their wings. They are also referred to as the Wee Harlequin Bug, or Two-spotted Stink Bug. They are found throughout Eastern North America. I do not see them very often, but this may be because of their diminutive size and at 4 to 6 mm they are tiny. Females overwinter in leaf litter and mate in the spring. She will lay eggs in clusters on plants and guard them until they hatch. 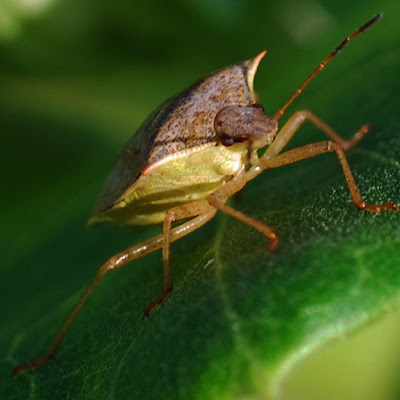 The Brown Stink Bug (Euschistus servus) is found mostly throughout the Eastern United States but there are scattered populations in the Northern part of the country. They are extreme generalist when it comes to their diet and feed on a wide variety of food, including plants and insects. They are considered to be of economic importance as their extreme appetite for all types of food causes damage to soybean, corn, cotton, alfalfa, sorghum, fruit, pecan, and tobacco a well as others. Adults overwinter in protected areas and become active in early spring and begin feeding. They will mate and second generation offspring will turn their tastes to agricultural crops.

Stink bugs are a class of insects that can be considered both good and bad. While many of them can and do harm agricultural crops, garden produce and orchards, there are equally as many out there that are feeding on pest insects that damage those same crops. These alien-looking insects are interesting and widely studied. I don't really think about them one way or another, but I will say I DO NOT squish them. PEEE EWWW!