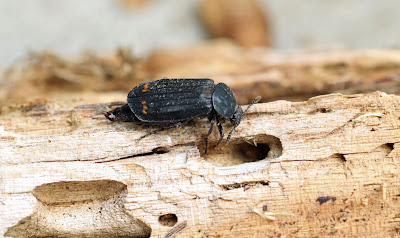 One of the most common beetles I found at the white sheet and mercury vapor light last summer was the Red-lined Burying Beetle (Necrodes surinamenis). They are also sometimes referred to as Red-Lined Carrion Beetles, Suriname Carrion Beetle and just Carrion Beetle. These are somewhat large beetles measuring up to 25 mm or approximately 1 inch in length.

They are one of approximately 183 beetles included in the Siliphidae family. These are broken into two sub-families called Silphinae and Nicrophorinae. Red-lined Burying beetles are included in the sub-family Siliphinae. These beetles along with other members of this sub-family are studied extensively by Forensic Scientists. Because of their relatively slow development and preference for hanging out on large dead mammals they are a potential goldmine of information to law enforcement in solving crimes of murder.

In the spring adult beetles, which have overwintered in sheltered locations, become active and seek mates near decomposing carcasses that they are able to smell from great distances. Mating will take place on the actual carcass as they crawl in and out of crevices of rotting flesh, or perhaps they will chose a less unsavory location "near" the carcass. Once mated the female will deposit eggs on the ground close to the carcass. It takes up to seven days for the eggs to hatch. Time for egg hatching is temperature and moisture related in most cases. Once hatched the tiny larvae will crawl onto the carcass and begin feeding on carrion and occasionally a wayward maggot (fly larvae) that may get in their way. The adults feed mostly on maggots and occasionally carrion. The feeding habits of the larvae and the adults seem to be in opposition of each other. 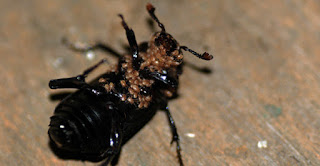 Occasionally you will find these beetles acting as transportation to a busload of mites. These mites do not harm the beetles and simply use them as a means of getting from one carcass to another.
The mites will feed on any leftover stinky flesh bits that may be attached to the beetle, in essence cleaning the beetle. They also feed on maggots when on the carcass. The beetle benefits by getting a mites version of a bath, and the mite benefits by being carried to the next carcass.


Carrion Beetles within the Silphidae genus usually choose large mammals for their dinner table. They exhibit little to no parental care. Carrion beetles in the genus Nicrophoridae however, DO exhibit parental care. They typically choose smaller animals such as mice or birds to feed themselves and their offspring. They will bury their food choice in the ground along with themselves and remain there to lay their eggs, and help feed and groom their offspring. Nicrophoridae usually have much faster development from egg to adult than their Silphidae cousins and thus are not as valuable to forensic science. 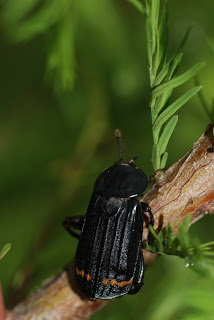 As you can well imagine these beetles have a foul odor when you happen to get one too close to the old olfactory. Many humans wouldn't dream of picking one up and with good reason (Just think about where they hang out!). The smell they carry with them as part of their everyday perfume is damned difficult to wash off your skin.  Not to mentioned they will add an additional dose of chemical defense pheromones when harassed. Being held by a giant (namely me) is all the harassment they need for sharing this odiferous blend of noxious cologne! BLEH!! Suffice it to say...."look but DON'T touch" is a good rule of thumb when it comes to carrion beetles.

Beetles within the Siliphidae family have been around for at least 10,500 years, and throughout that time their lifecycle has changed very little. If it's not broke don't fix it seems to be the mantra for these carrion-loving beetles. The body of the Red-lined carrion beetle is distinctly flattened for crawling under and around dead carcasses. They have deeply ridged wings. The color is dull black with a shiny black pronotum (thorax region). There are red or yellow markings on the hind portion of the wings. Occasionally individuals are found with no markings. Males have a unique leg structure. The hind legs have a large tooth on them. These tooth-like leg structures are most likely used during mating. Males also seem to have much longer abdomens which protrude from under the wings.

These beetles are typically nocturnal and may occur in large numbers at certain times of the year. As mentioned above, they are often found at lights at night. They occur throughout Eastern North America (East of the Rockies), portions of the Pacific Northwest and parts of Canada. 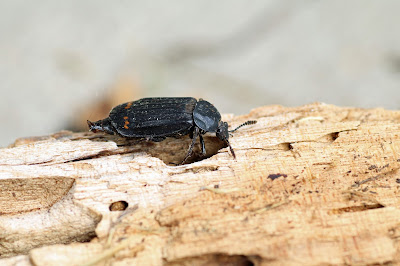 While large beetles can be somewhat startling to people who have no love of insects,  especially when they are hanging out near your porch light. These beetles are hugely beneficial to humans. Their preference for dead and decaying flesh make them the clean up crew for all things stinky and nasty. They break down tissue into organic matter that is readily absorbed into the soil which helps plants grow. Their feeding habits also remove potentially diseased animals from the environment making it safer for us and other animals. Their value in forensic science is irreplaceable in solving murder cases. They may not at first be very appealing, especially if you happen to catch a whiff of foul odor akin to rotting flesh coming off of one, but keep in mind not all things need to be cute, fluffy and smell good to be beneficial and valuable to us as humans.