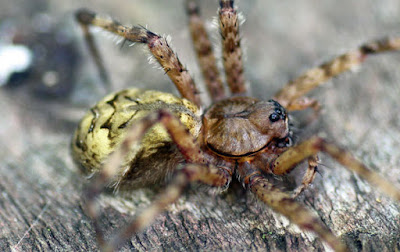 This uniquely beautiful spider is the White-Banded Fishing Spider (Dolomedes albineus). In July of this year my husband and I took a trip to the Smoky Mountains in Tennessee for a much needed vacation and to spend as much time as we could outside hiking and fishing and getting all the fresh air we could handle. We rented a cabin in the woods and were completely isolated from people, which was just the way we liked it. One morning as we headed out to a hiking destination, Joey noticed a large spider dangling from a strand of webbing on the eave of the cabin. I managed to get the spider down and did not recognize it, but I did recognize it was dying. We saw scant few insects or spiders around this cabin so my guess is the owner of the cabin probably sprays it for pests. I suppose many people appreciate that service when they stay there, but I for one found it incredibly disappointing. I love traveling and discovering new invertebrate life. I took a few pictures of this spider and then placed it in a safe area to spend its last few moments of life.

I submitted the pictures to bugguide.net and within a day or two had an answer as to the species, White-Banded Fishing Spider. I've seen many fishing spiders around my home in NW Missouri, but this one is so much more colorful and dare I say beautiful than the ones we have. This particular species of fishing spider is not known to be in Missouri, although they are found throughout the Eastern United States. I'm not sure how far west in Tennessee they occur, as this one was found about an hour west of North Carolina in a little town called Sevierville. It would be interesting to know if anymore research has been done to determine if these have made it across the river into Southeastern or Eastern Missouri. 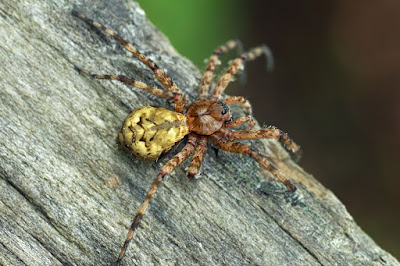 The common name of "fishing spider" would imply they live near water, and while that is true to some degree, they are also found quite frequently some distance from water, especially in damp woodland settings, like our cabin. While there was water near the cabin where this specimen was found it was nothing more than a narrow drainage ditch that ran alongside the cabin, almost like a tiny creek. It would only hold water if there was runoff from the surrounding hillsides or a recent rainfall. These spiders feed on a wide variety of insects, other spiders, and even tiny minnows and other small fish if they are able to catch them.

If found near water they will sit along the shore and rest their front legs on the surface of the water waiting for vibrations that will alert them to possible prey nearby. They are able to dart out across the water and grab unsuspecting aquatic insects. Some reports indicate that they may also capture small fish when the opportunity arises. 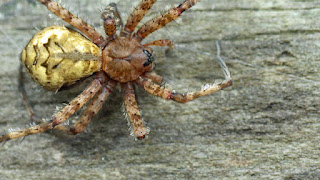 These spiders may live a couple of years or more and tuck themselves away in sheltered areas, including basements, cellars or under the bark of trees during the winters months in a form of hibernation. Mating will take place in the spring soon after hibernation. The female will form an egg sac sometime in June that she will carry with her. This maternal care helps guarantee that the spiderlings will hatch and get the best start possible free from predation. Egg sacs may contain up to 1000 individual spiderlings and hatch sometime between July and September. The young spiders will overwinter under the bark of trees, under logs, or rocks or in leaf litter. When spring arrives the cycle starts over.

While these spiders are large they are not aggressive. They are more likely to flee than stand their ground. Bites typically occur when they are mishandled. The bite is no more severe than a bee sting, however if you are allergic to bee venom or spider venom possible serious reactions can occur. 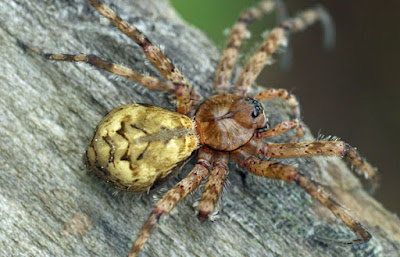