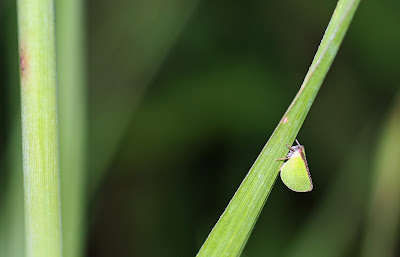 This time of year tiny leafhoppers, treehoppers, planthoppers and other "hopping" insects seem to be everywhere. Many of them blend in with their surroundings with perfect camouflage in shades of green, brown and combinations of both. This can make them somewhat difficult to see, but if you stand still for a minute and look carefully you will spot one without much trouble. They will often scurry to the other side of a twig, leaf, or blade of grass as soon as they spot you, or they may simply hop away disappearing from view. This strategy works in their favor to avoid any predator that might want to feed on a tiny hopping bug.

The one pictured here is the Two-striped Planthopper (Acanalonia bivittata) and they are considered the most common of all planthoppers in the United States. Worldwide there are 63 species within this genus, 18 of them are found in the United States. They are almost always green with a reddish-brown stripe along the inner edge of the wing. Occasionally you may find a pink specimen. They measure 1/4 to 15/64 inches in length (3 to 6 mm).

They are found throughout the Eastern United States feeding on woody, or herbaceous plants. Look for them in grasslands, woodland edges, open fields and on the leaves of trees.  They rarely occur in large enough aggregations to cause significant damage to plants.


Mating probably takes places in late summer or early fall and the female will use her sharp ovipositor to slice into twigs or the stems of many of the plants they feed on, like blueberries for instance. She will lay her eggs within the slit she creates and the eggs overwinter. When spring arrives the eggs hatch and the nymphs superficially resemble their parents. They reach the adult stage by late summer and the cycle will begin again.