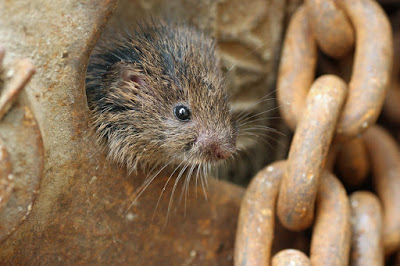 Are you wondering why I am featuring a mammal on an insect blog? Just look at this face how could I possibly resist sharing? Plus, they eat insects, so it ties in with the blog theme right?

This adorable little rodent is a Prairie Vole (Microtus ochrogaster) and they are common throughout the midwest. This one was caught in a live trap for rats and wasn't smart enough to figure out he could fit through the holes in the cage. I thought about feeding it to my pet snake, but I just couldn't bring myself to do so because it was too cute. I let it go and it ran into an old pulley we had laying on the porch. I managed to take a few pictures before I placed it inside an old bird house. 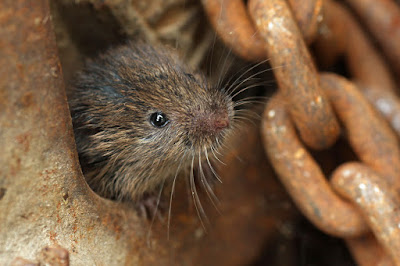 Prairie Voles are found in dry, grassy areas where they dig tunnels and burrows that they are quick to retreat to when alarmed. They are known to live in family units and many individuals may share the same burrow and tunnels. They are also known to be monogamous which is unlike most other voles, or even other small rodents like mice for instance. After prairie voles mate, the male will remain by the females side for a period of at least 24 hours then they will become a mated pair and remain together for the remainder of their lives, which is short at about 2 years (if they aren't eaten first). This relationship does not seem to be based on sex, but rather a social behavior, They will groom, cuddle and touch each other continuously while together and share in rearing their offspring. Mating takes place in the spring or fall and about 25 days later she will give birth to about a 1/2 dozen hairless, blind babies. Litter size is dependent upon food sources available. Less food=smaller litters.  She may have up to 4 litters a year. If the females is killed, the male generally does not seek another life partner. Even though they are "monogamous" they will upon occasion seek a little somethin-somethin on the side and mate with an available sexual partner, but will not pair bond with that mate.

The young open their eyes at about one week of age and by two to three weeks are self sufficient. Females are able to reproduce by 40 to 45 days of age. Like all small rodents or rabbits, they reproduce often, and reach maturity at a rapid rate. They are important prey items for many wild animals including snakes, owls, hawks, coyotes, foxes, raccoons, etc. Some consider them a pest because they will get into gardens and feed on seeds, produce and other plants. They will also consume some insects, but seem to prefer vegetation. They may feed on stored grain, but overall the benefit outweighs any negative aspects attributed to these tiny rodents. If however you decide to use poison baits to remove them, be aware that any poison they ingest will make its way into the food chain. The poisoned vole, will be eaten by an owl and consequently the owl will be poisoned. Most of the time if you are tolerant of the predators such as snakes, coyotes, etc they will take care of any voles that are hanging around your garden. Nature has a way of balancing itself if we let it. 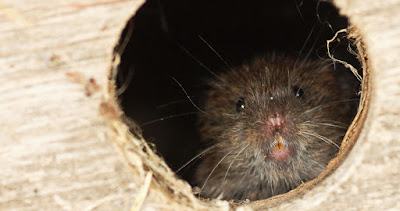 In 1994, in Pulaski County, MO a single Prairie Vole was found to be a reservoir for a disease uniquely described to them called Bloodland Lake Virus which is a type of Hantavirus. It was later found in voles in St. Louis County, MO. Hantavirus is a very serious disease spread through the droppings of rodents and bats to humans. High concentrations of virus laden excrement can dry out and the dust off this waste can become airborne and be inhaled by humans. Hantavirus is rare, but can be fatal. While the prairie vole has been shown to harbor this virus in its system there has been no transference to humans to date. All reported cases of Hantavirus in humans have been traced back to bats, mice and rats. I find it fascinating that these little guys carry such a potentially life threatening virus in their system, but it has not found a way to infect humans. Maybe it is largely due to the fact that voles don't generally share our dwellings like other rodents and even bats can and will. We are far more likely to come in contact with these other carriers than with a vole.

They are active year-round and do not hibernate. They will create tunnels in the snow to travel back and forth to burrows and food stores. They will cache food for the winter such as berries, nuts and seeds. During the warmer months they are primarily nocturnal and are rarely encountered in daylight hours.

This little vole was fed an apple wedge and sent on his or her way to continue reproducing and providing necessary nutrition to all the wildlife living in our area.